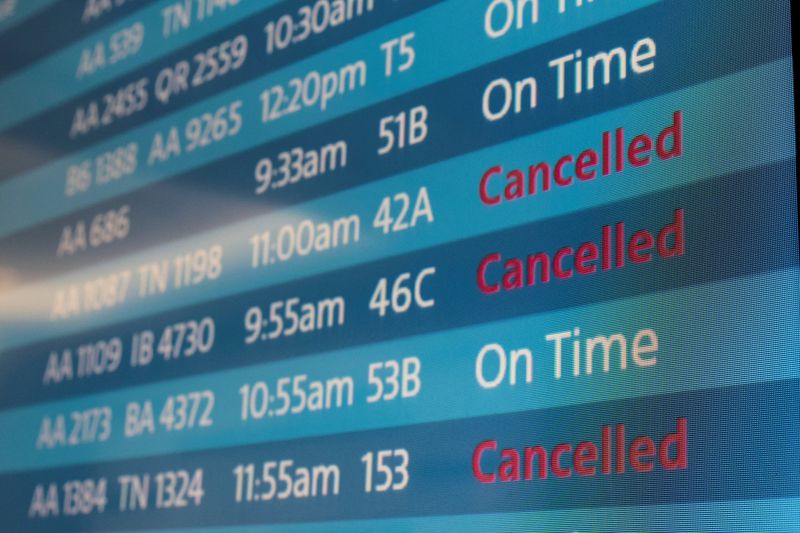 © Reuters. FILE PHOTO: A screen showing cancelled flights is seen at Los Angeles International Airport as more than 1,400 American Airlines flights over the weekend were canceled due to staff shortages and unfavorable weather in Los Angeles, California, U.S., Octobe

This is the latest effort by the department to prod the airline industry into voluntarily committing to provide compensation and other benefits to passengers impacted by flight problems. Airlines and USDOT sparred over the summer about who was to blame for tens of thousands of flight delays and cancellations.

A senior USDOT attorney involved in aviation consumer protection issues asked major airlines in emails to answer by Monday whether they will commit to providing $100, frequent flyer miles or airline travel vouchers for delays of three hours or more when delays are the fault of the airline, according to three people briefed on the matter.

USDOT also wants airlines to commit to compensating consumers for canceled flights when it results in at least a three-hour delay. The department then plans to post the results on a government dashboard it released last month, according to the sources. USDOT also asked carriers to commit to rebooking passengers on non-partner airlines.

USDOT’s “request would simply raise the cost of travel for everyone and goes beyond the scope and intent of the Dashboard by proposing punitive measures rather than offering improvements to transparency that would benefit the consumer.”

The group added USDOT’s approach does not acknowledge airlines’ significant progress, nor the impact of weaather and air traffic control on flight elays.

There is no legal requirement for airlines to compensate U.S. passengers for delayed flights but Transportation Secretary Pete Buttigieg told airlines in August USDOT is contemplating new rules to expand passenger rights. He has faced pressure from Congress and state attorneys general to do more to ensure airlines properly treat consumers.

Asked about the planned update to the dashboard, a USDOT spokesperson said “we’ll continue to have the traveling public’s back and work to increase transparency so Americans know exactly what the airlines are providing when they have a cancellation or delay.”

In August after USDOT said it would grade airlines on the new dashboard, major airlines updated written customer service plans to say they would provide meals for three-hour delays and hotel rooms for stranded passengers if prompted by issues under the airlines’ control. Many airlines previously offered meal vouchers or hotel rooms for delays they caused but did not spell out commitments in customer service plans.

President Joe Biden last month said his administration had cracked down on U.S. airlines to improve treatment of passengers citing the dashboard — a claim rejected by carriers.