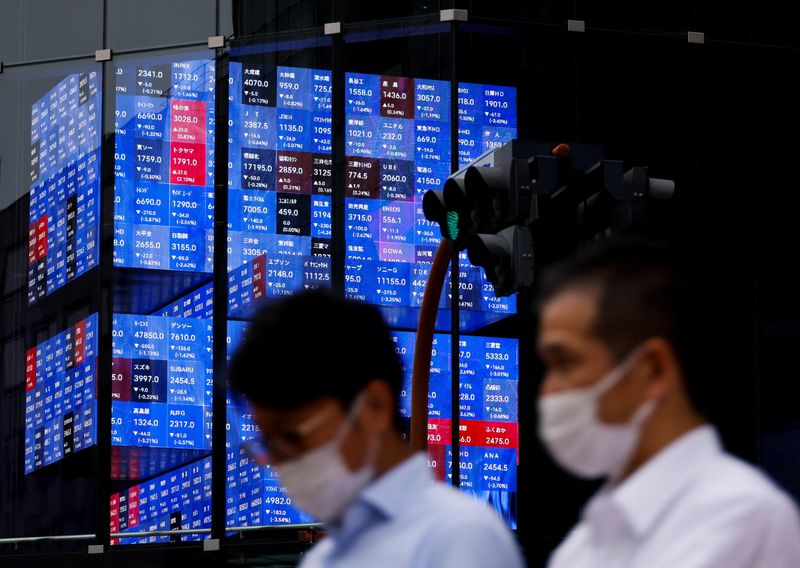 SYDNEY (Reuters) – Asian shares edged higher on Monday as investors hoped steps to unwind pandemic restrictions in China would eventually brighten the outlook for global growth and commodity demand, even if full freedom could be months away.

The news helped oil prices firm as OPEC+ nations reaffirmed their output targets ahead of a European Union ban and price caps on Russian crude, which kick off on Monday. [O/R]

More Chinese cities announced an easing of coronavirus curbs on Sunday as Beijing tries to make its zero-COVID policy more targeted and less onerous after recent unprecedented protests against restrictions.

“While the easing of some restrictions does not equate to a wholesale shift away from the dynamic COVID zero strategy just yet, it is further evidence of a shifting approach and financial markets look to be firmly focussed on the longer term outlook over the near-term hit to activity as virus cases look set to continue,” said Taylor Nugent, an economist at NAB.

Indeed, 10-year note yields have fallen 74 basis points since early November, effectively undoing much of the tightening of the Fed’s last outsized hike in cash rates.

Markets are wagering Fed rates will top out at 5% and the European Central Bank around 2.5%.

“But U.S. and Euro area labour demand remain surprisingly strong, and alongside a recent easing in financial conditions, the risks are shifting toward higher-than-anticipated terminal rates for both the Fed and the ECB,” warns Bruce Kasman, head of economic research at JPMorgan (NYSE:).

“The combination of labour market resilience with sticky wage inflation adds to the risk that the Fed will deliver a higher than 5% rate forecast at its upcoming meeting and that Chair Jerome Powell’s press conference will shift to more open-ended guidance regarding any near-term ceiling on rates.”

The Fed meets on Dec. 14 and the ECB the day after. Speaking on Sunday, French central bank chief Francois Villeroy de Galhau said he favoured a hike of half a point next week.

Central banks in Australia, Canada and India are all expected to raise their rates at meetings this week.

The steep fall in U.S. yields has taken a toll on the dollar, which fell 1.4% last week on a basket of currencies to its lowest since June.

The drop in the dollar and yields has been a boon for gold, which was hovering at $1,797 an ounce after rising 2.3% last week to touch a four-month high. [GOL/]

Oil prices bounced after OPEC+ agreed to stick to its oil output targets at a meeting on Sunday.

The Group of Seven and European Union states are due on Monday to impose a $60 per barrel price cap on Russian seaborne oil, though it was not yet clear what impact this would have on global supply and prices.