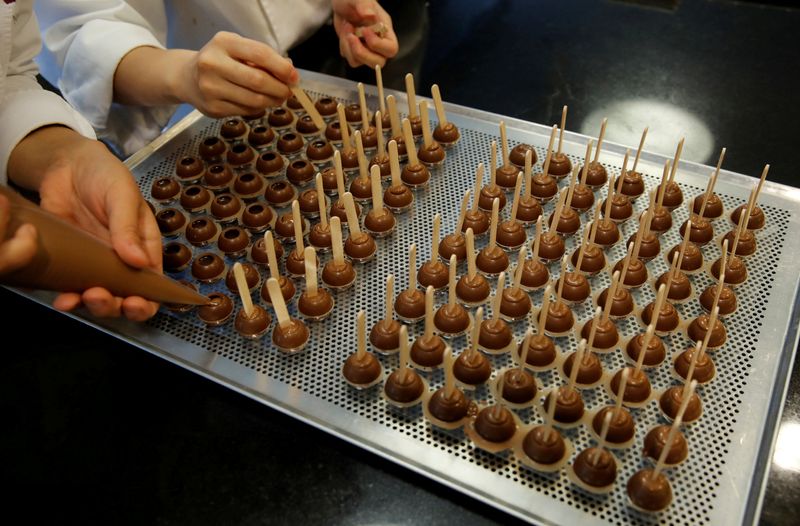 LONDON (Reuters) – In a move it hopes will redefine the way chocolate is made, Swiss-based Barry Callebaut launched a new bar on Thursday, the fruit of more than 20 years of research into cocoa beans.

The world’s biggest chocolatier said its “second generation” chocolate will use around 50% less sugar than traditional chocolate thanks to a new way of cultivating, fermenting and roasting cocoa beans that reduces their bitter taste.

The product, which will also use about 60-80% more cocoa, is likely to appeal to more health-conscious consumers and get ahead of laws expected to limit sugar consumption in the future, analysts said.

“Anything cutting sugar or using simpler, cleaner, recipes is going to be a positive given consumer and thus corporate demand for those products,” said Kepler Cheuvreux analyst Jon Cox.

The chocolate giant, which supplies the world’s biggest consumer brands including Nestle, said its new chocolate has been tested by independent global research agency MMR in the United States, Britain and China, and found to have high consumer appeal.

The innovation could eventually help increase global cocoa consumption and prices should it be widely adopted, while it might leave sugar consumption largely unscathed as sugar cane is increasingly used to make ethanol, industry experts said.

“For cocoa, (it’s) really positive for consumption and therefore the price outlook. However, I think we are talking about years not months,” said a London-based consultant.

World cocoa prices are more than four times that of sugar.

The new chocolate is more expensive to produce and might be priced slightly higher than regular chocolate, a Barry Callebaut spokesperson said. It could, however, also be sold in smaller bar sizes and is ultimately not aimed at upmarket consumers.

One in four chocolate and cocoa products consumed worldwide are made with Barry Callebaut ingredients and the group processes almost one million tonnes of cocoa a year, about a fifth of the global volume.

Barry Callebaut has since 2017 launched healthier alternatives such as “ruby chocolate”, “wholefruit chocolate” and a cocoa-based drink “Elix”, with varying degrees of success.

It generally takes between a year or two for a new product to go from launch to supermarket shelves.

“(The) approach by Barry Callebaut fits the way the food market is going,” said Tedd George, commodities expert and founder of Kleos Advisory. “Sugar is definitely the new tobacco. The way chocolate is made will gradually move in this direction as legislation against sugar in food hardens.”