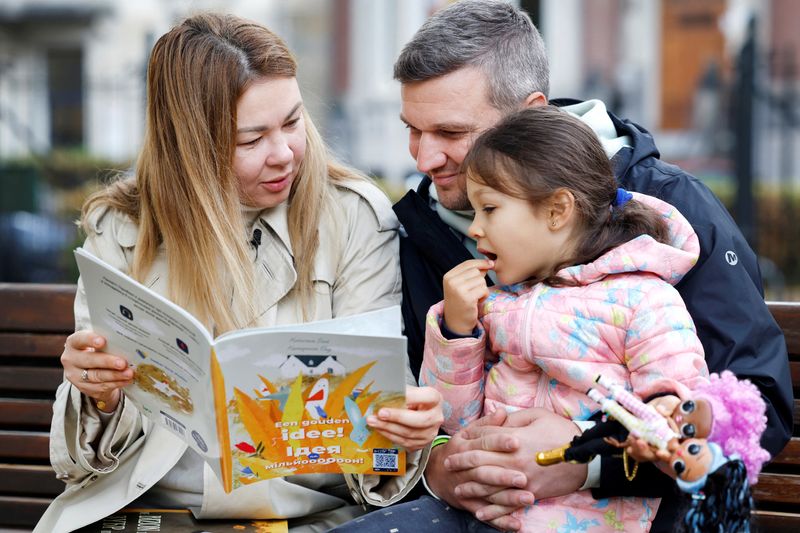 ROTTERDAM (Reuters) – When Ruslan Mykhalchenko leaves his family in the Netherlands to return home to Ukraine next week, one of the things he will miss most is reading his 5-year-old daughter Olivia a bedtime story.

It’s a harsh reality for Mykhalchenko and countless Ukrainian fathers who have been separated from their families by the war with Russia, now entering a ninth month.

Martial law in Ukraine prevents men aged between 18 and 60 leaving the country. Mykhalchenko, who works with an NGO in Ukraine, was able to *** some time with his refugee family this week in the Netherlands while collecting an aid delivery.

Now, an audiobook app, “Better Time Stories”, makes it possible for Olivia to hear her dad’s voice when she goes to sleep at night, even when they’re apart.

The app, which is funded by donations, offers five titles selected to help children process the trauma of war and is aimed at kids from 3 to 7 years old.

Mykhalchenko, 41, recorded himself reading Olivia’s new favourite book, “101 Lighthouses”, about a father who counts lighthouses with his son to help him fall asleep.

“This book is very special to me, because (Olivia) is far from me, from my heart,” Ruslan said, as he struggled to contain his emotion during a recent reunion in Rotterdam.

The interactive books come with a QRcode that, when scanned or tapped, opens an app with an audiobook version. The app also allows families to send a link so that fathers can record their own audio version, which then appears in the app.

Fathers can see the picture books online and record their audio page by page. If unwanted noises like air-raid alarms disturb their reading, they can re-record sections.

The story app was created by Andriy Shmyhelskyy, an Amsterdam-based social tech entrepreneur originally from Ukraine. Shmyhelskyy, who has lived in the Netherlands since 2014, wanted to help refugee families stay connected with men who stayed behind in Ukraine.

“I wanted books that will help mother and child to work together and through this emotional distress (of) what is basically a separation,” he told Reuters.

According to the United Nations refugee agency UNHCR, 90 percent of the more than 7 million refugees from Ukraine are women and children. In a recent UNHCR survey, more than three-quarters of all refugees questioned said they had suffered a family separation.

Packages with five bilingual books in Ukrainian and Dutch, or Ukrainian and German, can be requested by refugee families from the Better Time Stories website.

Using donations received since late September, around 1,000 orders have been accepted in the Netherlands, of which 200 have already been delivered. Shipments for the German language version have not started yet, Shmyhelskyy said.

The mailed package, which includes all five books to accompany the app, costs 15 euros.

Yulia Bilan, a mother of two sons, is eight months pregnant and has been living as a single parent in The Hague since the war broke out. Her husband remains in Bucha, near Kyiv.

Her boys Ilja, 10, and Pasha, 11, are a too old for picture books but were happy to receive their first Ukrainian books in months, which they are reading to their unborn sister.

The books are helping her family process difficult emotions, Bilan said, as her son Pasha showed visitors his favourite, a book called “The Day War Came To Rondo”.

Mykhalchenko said he will savor reading to Olivia until he drives back to Ukraine next week, leaving behind his wife, 37-year-old Alla. He lives in Mykolaiv, a city near the Black Sea that is the target of frequent Russian missile attacks.

Alla said the audiobooks her husband recorded have helped her feel less alone.

“Before we fall asleep we listen to his voice and fall asleep more safe, more quiet,” she said.