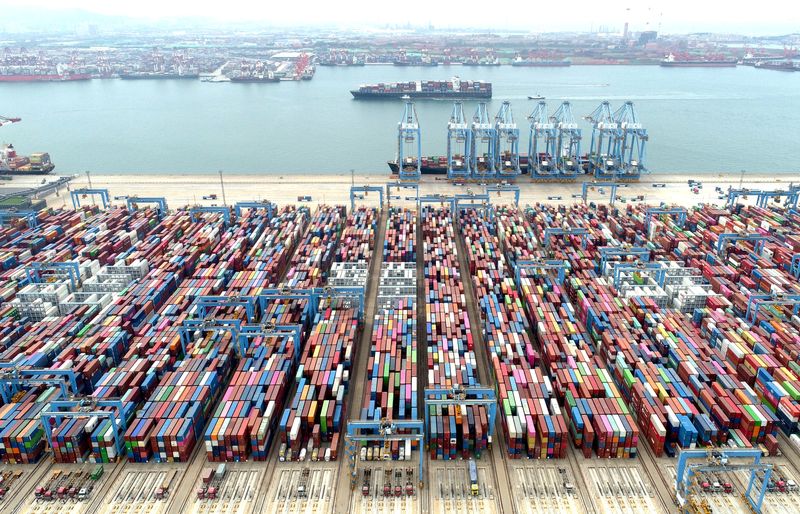 © Reuters. FILE PHOTO: An aerial view shows containers and cargo vessels at the Qingdao port in Shandong province, China May 9, 2022. Picture taken with a drone. China Daily via REUTERS

Exports likely rose 4.3% last month from a year earlier, according to the median forecast of 20 economists in the poll, slowing from a 5.7% pace in September. That would mark the slowest growth since April when Shanghai COVID lockdowns rocked the world’s second-largest economy.

“As the U.S. and European economies slow, demand for electronic components may remain sluggish into next year,” he added.

The trade data will be released on Monday.

China’s booming exports outperformed expectations in the first half of 2022 — and were one of the few bright spots for its struggling economy — but global interest rate hikes, surging inflation and disruptions from the Russia-Ukraine war have combined to dampen global demand.

High-frequency data point to a further slowdown in the fourth quarter, with container throughput at major ports falling 9% in the first 10 days of October, Barclays (LON:) economists said in a note.

“In addition to slowing global demand amid a likely global recession, we note export orders normally sent to China are being diverted to other emerging market economies.”

Combined with a high base of comparison from last year, Barclays forecast China’s exports could fall 2-5% in 2023.

Imports were forecast to have risen just 0.1% from a year earlier, the poll showed, compared with a 0.3% gain in September.

The weak trade forecasts implied that China’s trade surplus would widen to $95.95 billion from 84.74 billion in September.

China’s COVID-19 cases hit their highest in two and a half months on Thursday, with the impact of the curbs continuing to reverberate. Goldman Sachs say cities with high or mid-risk districts accounted for around 52% of national GDP as of Friday.