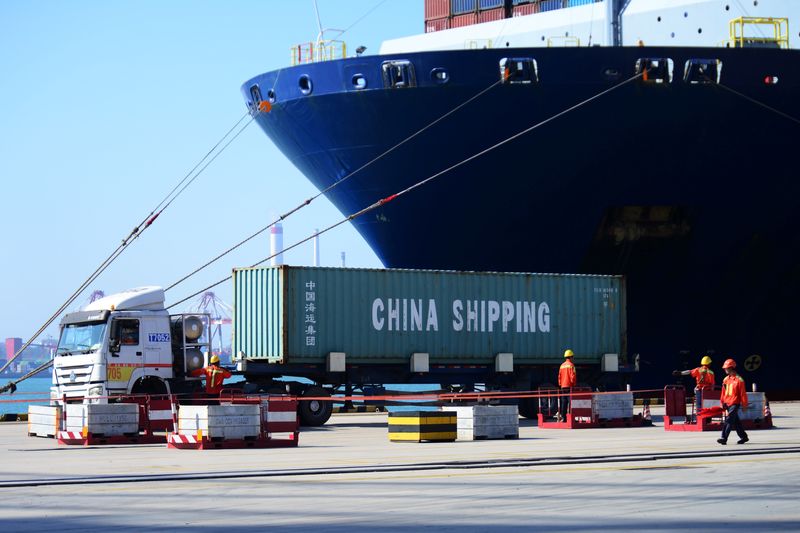 © Reuters. FILE PHOTO: A truck transports a container next to a cargo vessel at a port in Qingdao, Shandong province, China June 24, 2019. Picture taken June 24, 2019.

By Siyi Liu and Dominique Patton

BEIJING (Reuters) -China’s imports in September climbed 25.6% from a year earlier, with demand expected to rise as local governments ramp up infrastructure spending to offset a slowdown in the world’s top metal consumer.

Unwrought copper and copper product imports into China – including anode, refined, alloy and semi-finished copper products – totalled 509,954.1 tonnes in September, data from the General Administration of Customs showed on Monday.

September and October traditionally see a pick-up in metals demand as industry ramps up after summer maintenance.

“Copper imports were up strongly as outlook for demand from the power sector improves,” ANZ Research said in a note.

“This was supported by lower prices and a favourable import parity.”

In September, financial hub Shanghai announced investment plans in infrastructure worth 1.8 trillion yuan ($248.2 billion), to spur economic growth after the city was hit hard by pandemic lockdowns in April and May.

Earlier in August, China’s State Grid said it planned to invest more than 150 billion yuan ($22 billion) in the second half of 2022 in ultra high voltage (UHV) power transmission lines.

Aside from firm demand, the market in China is also encountering supply tightness, partly due to lower-than-expected domestic output caused by power curbs ordered in some parts of China during the summer heatwave.

Liquidity issues at Maike Group, China’s top copper importer, also caused some tightness in the market, according to analysts and participants in the market.

The firm market fundamentals in China contrasted with that in the rest of the world where demand has remained subdued.

Three-month copper prices on the London Metal Exchange averaged $7,560 a tonne in September, the lowest since November 2020.

Notably, China’s refined copper imports from Russia totalled 39,557 tonnes in September, up 134.5% from a year earlier.

Buyers in China see a likely continued increase of Russian supply next year offsetting the impact of an expected increase in copper premiums from other global miners.