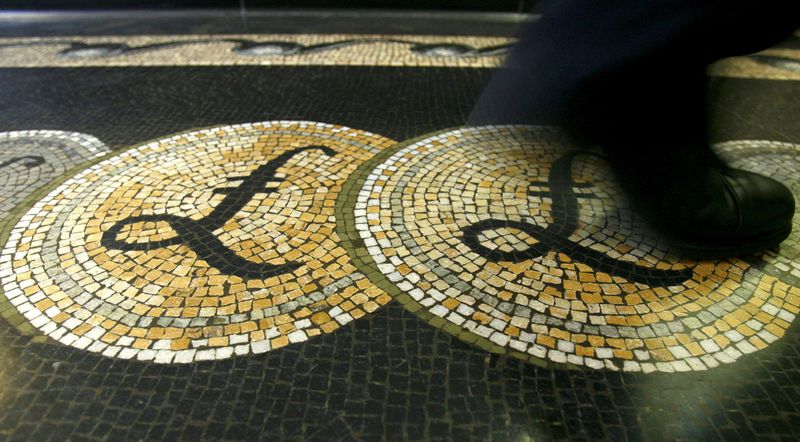 © Reuters. FILE PHOTO: An employee is seen walking over a mosaic of pound sterling symbols set in the floor of the front hall of the Bank of England in London, in this March 25, 2008 file photograph. REUTERS/Luke Macgregor

LONDON (Reuters) – The pound has pulled off its biggest monthly increase against the U.S. dollar since July 2020 in November, although its rally was eclipsed by peers such as the yen and the Swiss franc.

Sterling had jumped about 5% against the greenback in November, as of 2110 GMT Wednesday, with a slowdown in U.S. inflation providing some much-needed relief to the world’s battered currencies.

The rally came on top of a 2.7% rise in October, when Rishi Sunak replaced Liz Truss as prime minister, burying her plans for large unfunded tax cuts. The pound traded at around $1.20 on Wednesday, far above September’s record low of $1.033.

Yet November’s performance was driven more by the U.S. economy than any excitement about Britain’s prospects, analysts said. Others in the top 10 most traded currencies fared better than sterling in November, with Japan’s yen jumping more than 7%.

Soaring U.S. interest rates have sucked money back to dollar assets this year. But a sharp fall in the U.S. inflation rate in October caused traders to bet the Federal Reserve will slow down its rate hikes. That triggered a plunge in bond yields and the biggest monthly drop in the , which measures the greenback against a basket of peers, since 2010.

“We’ve seen both the arrival of the so-called adults in the room … and we’ve seen a pretty remarkable thaw in the background globally, with clear intent by the Fed to slow its pace of tightening,” said John Hardy, head of FX strategy at Saxo Bank.

Strategists said traders rapidly reducing their bets against the pound in the futures market, as the government changed and U.S. inflation data shifted, has added impetus to the rally.

“The broader FX move does seem to be related to a broader positioning unwind,” said Meera Chandan, co-head of global FX strategy at JPMorgan (NYSE:).

Sterling’s rise is less impressive when looked at from other angles. Against the euro, the pound slipped slightly in November. And so far this year, its fall of roughly 11% versus the dollar is considerably worse than the euro’s decline of 9%.

“We think the easy gains have been had for now,” said James Athey, investment director at Abrdn. “The reality is that a recession is coming, and a Fed rescue is coming less quickly than in recent years.”