There’s an early 2000s interview with director Quentin Tarantino in which a conservative pundit berates him about the level of gruesome violence in his movies. Their impassionate pleadings question the need for violence, but they’re met with a ridiculing, frustrated: “Because it’s so much fun, Jan. Get it?”

I thought about that interview as I played Evil West, the new game from the shooter masters at Polish studio, Flying Wild Hog. Evil West is an old-school action game that blends melee combat with firearms; a hybrid you don’t often see in the modern era.

Set in an alternate version of America’s wild west frontier lands, the story follows a secretive vampire-hunting order that has been dealing with an evolving threat for generations, while the government covers up their discoveries as viral outbreaks.

It’s a silly game, and it knows it, often revelling in its love for man-on-monster violence.

That setup only really exists as a justification for introducing a range of monsters that you get to fight using era-appropriate weapons – it could have just easily been zombies or aliens. It also allows for a lot of liberty with the technology, in-world. If you’re okay with vampires existing, you’re probably going to be fine with electrical-infused gauntlets and railgun upgrades for your lever-action rifle.

This is where Evil West at its best, and worst. When you finish watching a cutscene, you’re thrown into restrictive levels made up of clear encounter areas, quiet zones where you’re left to look for collectibles, and the occasional puzzle standing between you and getting to either of those two areas.

Though level layouts aren’t always predictable, how you navigate through them is. Painfully so. Like a game from the Xbox 360 generation, designers expect you to move around those levels in a specific way: if they say you can’t step over this log, you won’t be able to. If they decide that you can airily hop between rocks to reach a dangling chain, your character will play the canned animation that does that. With the exception of one mission, you’re never given freedom in how you want to explore the world.

Worse still, the game doesn’t make clear which areas lock you in and which let you backtrack. I typically like to exhaust all possible routes in a level before heading to the main objective, but you rarely know which is which in Evil West. The same spot that let you mantle one way can decide you can’t mantle the other. Whether that’s due to a bug, or whether it’s the game’s intended behaviour makes going through missions frustrating. It’s like the game doesn’t want you to spend too long poking around. Despite the secrets it’s hiding.

I don’t necessarily find it off-putting that Evil West’s levels are linear, it’s the way you’re allowed/not allowed to move through them that’s puzzling. Doom 2016 and its sequel share a similar approach to their level design; you know when you’re going to be in a fight and when you’ll be left to your own devices. But those games allow you to “fail”; they let you chase dead ends and end up somewhere you can’t access yet because you don’t have a certain upgrade.

Evil West railroads you too much for it to feel anything but a video game; one hiding an archaic core underneath its modern visuals. 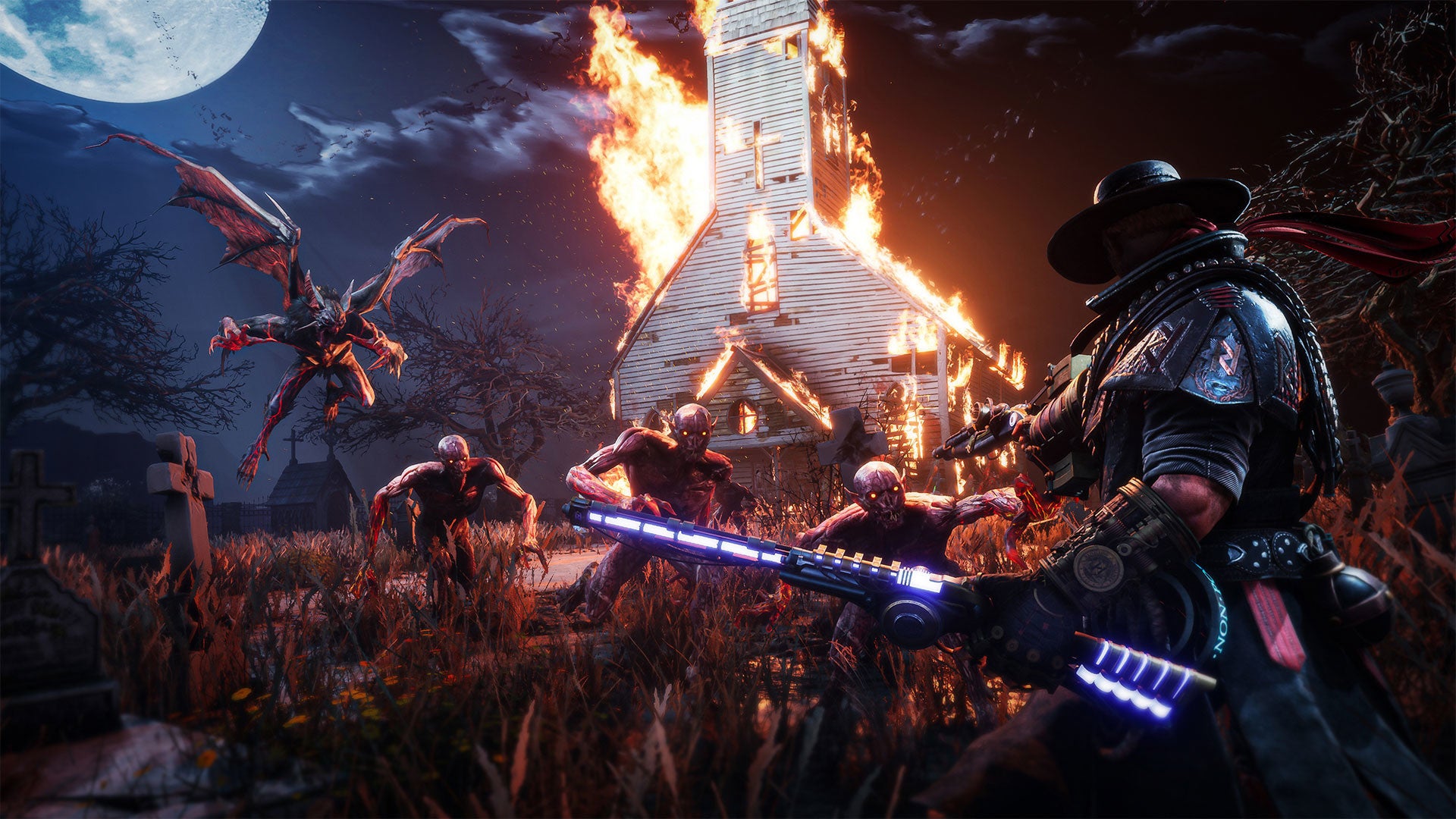 If you’re only here for the combat, you’ll have a good time.

Evil West’s redeeming quality – and the one thing that will make or break it for a lot of players – is combat. It’s also the game’s most thought-out component, one that ramps up excitement and difficulty throughout.

Things start off simple; you can punch, juggle, and hurl enemies cannonball-style toward conveniently placed TNT caches and spikes. Before long, you’re taught to use a rifle for long range, and quickly fan the revolver’s hammer to dispatch with enemies who get too close.

Later, you’re introduced to a double-barrel shotgun that effectively rounds out your main arsenal. Ammo recharges constantly, so you rarely worry about reloading. The way the buttons are mapped (on controller, at least) is intuitive and helps make the action fluid. The right trigger shoots the revolver by default, or the lever action if you’re aiming down sights. It takes the pressure off your brain and puts it on your fingers.

Evil West manages to keep all its toys fresh for its relatively short runtime by doling them out one by one. As you play, you’ll see that some elements on your HUD are locked, suggesting that something is going to fill them up at some point. This keeps combat interesting, because you know something good will be unlocked later to give you an edge. It also allows you enough time to get familiar with what you already have, and chart out a path in their respective upgrade trees.

Each of the main weapons can be upgraded using money earned by levelling up, and scattered around the world in caches, chests and… on the corpses of some of the hanged people you come across. Character upgrades are instead gained through perks, with a limited number of perk points available.

Across the board, some upgrades offer clear linear improvements, while others allow for more meaningful variations of your repertoire. Given that you have more perk slots than points, Evil West does the right thing by letting you re-spec freely – and quite early into the game, too. 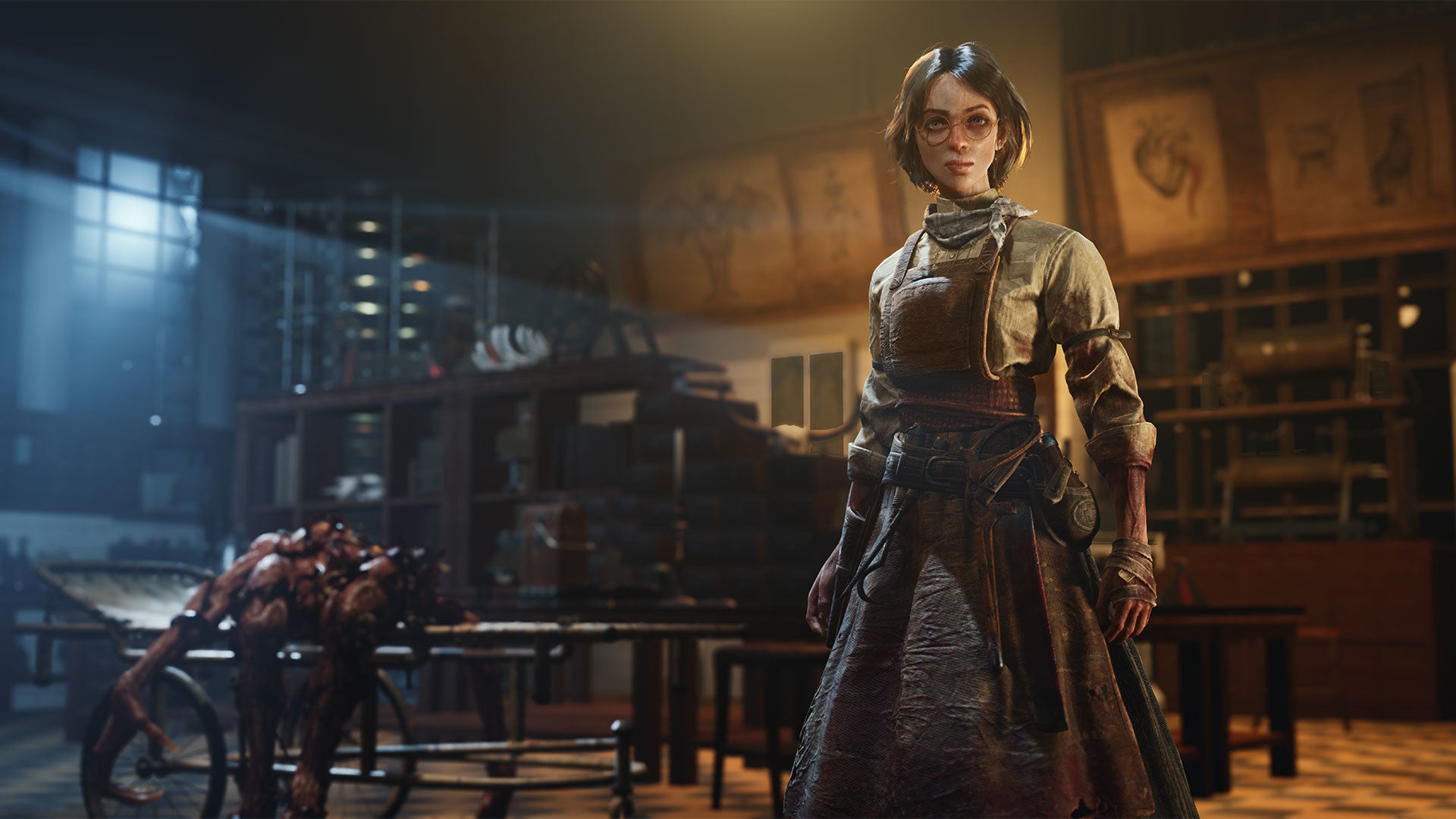 Combat flow is one area that would benefit from some work post-launch, though. There are different elements at play that could make things unnecessarily chaotic, particularly when you’re pitted against different enemy types that each demand a certain approach to take down.

The fodder can be hurled into bigger opponents, easily interrupted with a shock of your electric gauntlet, and get stunned quickly. This opens them up for a Doom-like glory kill.

The larger foes, however, effectively have layers of defence you need to tear through. Depending on the enemy, you may need to destroy shields before you can deal any real damage, while others swing their weapons so fast you need to interrupt them with a kick to keep their damage under control.

Some encounters can be nail-bitingly exciting as you teeter on the edge of death waiting for your healing ability to recharge. Others are a test of stamina more than anything, killing that momentum. Constantly trying to dodge off-screen projectiles while dealing with three shielded foes pushing you into a corner… it’s an antithesis to the electric action elsewhere.

Having played the entire game solo, I felt that some fights were balanced with co-op in mind. This is also true for certain bosses, but the game mercifully checkpoints every boss phase. Outside of bosses, the auto save frequency is unusually spotty. The game will tell you how long ago it auto-saved, which – while welcome – exposes a problem.

Evil West simply doesn’t save as often as you think it should, and I frequently continued playing simply to get to the next cutscene or major moment, because I didn’t want to repeat the last 12 or so minutes.

If any trailer is gonna sell you on Evil West, it’s this one.

It’s these sorts of issues and puzzling design decisions that add unnecessary friction for a game with this style of action.

It took me about 13 hours to see the credits, having missed half-a-dozen or so collectibles. If you hunt for every sack of bucks or lore piece, I imagine it’ll take you an hour or so longer to finish. I appreciate shorter games more and more these days, but I doubt everyone interested in Evil West will see it that way. Flying Wild Hog clearly wants you to replay every level, however.

You can easily restart missions from the menu, and the game clearly shows which collectibles you missed so you can go back for them. I imagine people entranced by the game’s combat will opt for a New Game+ playthrough instead, or start a higher difficulty run on a separate save slot.

If you manage to convince a friend to buy it, you can play the game together in co-op, but there’s no matchmaking or cross-play, so your only option is roping a friend into a purchase that isn’t cheap. It’s already a hard sell, especially once you learn that only the host makes progress.

However you feel about Evil West, the $50/$60 asking price is too steep for what’s on offer: the nature of its level design, limited enemy variety, and forgettable story will get in the way of your enjoyment, even if you’re only there for the combat. As engaging as it is, that action just doesn’t make up for Evil West’s shortcomings elsewhere.

Evil West is out tomorrow, November 22.