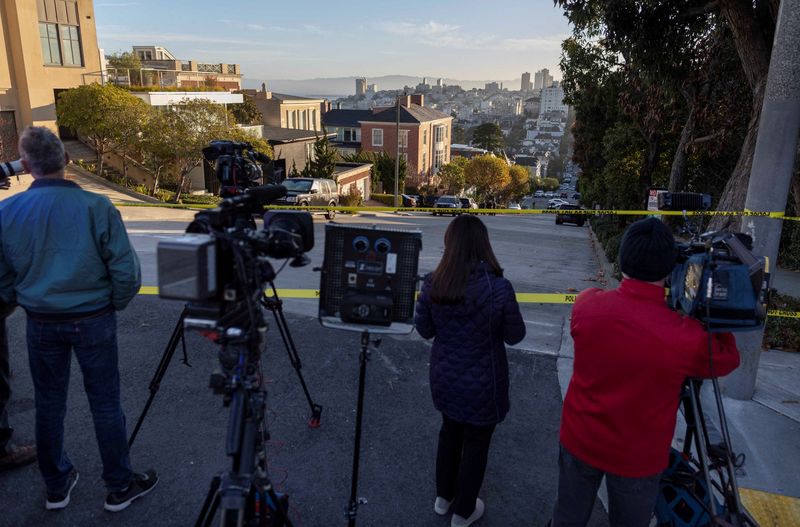 © Reuters. Members of the media work next to police tape outside the home of U.S. House Speaker Nancy Pelosi where her husband Paul Pelosi was violently assaulted after a break-in at their house, according to a statement from her office, in San Francisco, California

By Nathan Frandino and Steve Gorman

SAN FRANCISCO (Reuters) – The man who clubbed U.S. House Speaker Nancy Pelosi’s husband in the head with hammer, shouting “Where is Nancy?” after forcing his way into the couple’s San Francisco home, faced charges of attempted murder and other felonies a day later.

Police initially declined to offer a motive for Friday’s assault on Paul Pelosi, 82, who according to his wife’s office underwent surgery for a skull fracture and injuries to his right arm and hands, though doctors expect a full recovery.

But the incident stoked fears about political violence less than two weeks ahead of midterm elections on Nov. 8 that will decide control of the House of Representatives and Senate, coming amid the most vitriolic and polarized U.S. political climate in decades.

The 82-year-old House speaker herself, a Democrat who is second in the constitutional line of succession to the U.S. presidency, was in Washington at the time of the assault.

She flew to San Francisco to be with her husband. Three dark-colored SUVs believed to belong to a special security detail were parked on Saturday with a city police patrol car outside Zuckerberg San Francisco General Hospital, where Paul Pelosi was admitted.

Paul Pelosi Jr., the couple’s son, was also at the hospital. Asked by a reporter for an update on his father, he replied: “So far, so good.”

President Joe Biden, speaking to reporters in Wilmington, Delaware, on Saturday, said he understood Pelosi’s husband “seems to be doing a lot better,” and that the attack appeared to have been “intended for Nancy.”

Police identified the man arrested at the scene as David DePape, 42. He, too, was taken to a San Francisco hospital, but it was not made clear whether he was there for medical or psychiatric care or both.

Online sheriff’s records showed he was booked into custody on suspicion of attempted murder, assault with a deadly weapon, elder abuse, battery, burglary, threatening a public official or family member, and other felonies. Formal charges will be filed on Monday, and his arraignment is expected on Tuesday, according to the San Francisco district attorney’s office.

San Francisco Police Chief William Scott told a Friday night news briefing that police detectives, assisted by FBI agents, had yet to determine what precipitated the home invasion but said, “We know this was not a random act.”

A statement from Nancy Pelosi’s spokesperson, Drew Hammill, said Pelosi’s husband had been attacked “by an assailant who acted with force, and threatened his life while demanding to see the Speaker.”

The intruder shouted, “Where is Nancy?” before attacking, according to a person briefed on the incident who spoke to Reuters on condition of anonymity.

FROM HEMP TO HATE?

In the search for a motive, attention turned to the suspect’s apparent internet profile.

Older messages promoted quartz crystals and hemp bracelets. Reuters could not confirm the posts were created by the suspect arrested Friday.

Experts on extremism said the attack could be an example of a growing trend they call “stochastic terrorism,” in which sometimes-unstable individuals are inspired to violence by hate speech and scenarios they see online and hear echoed by public figures.

“This was clearly a targeted attack. The purpose was to locate and potentially harm the speaker of the House,” said John Cohen, a former counterterrorism coordinator and head of intelligence at the Department of Homeland Security who is working with U.S. law enforcement agencies on the issue.

The San Francisco Chronicle posted a photo of a man it identified as DePape dancing at the 2013 wedding of two nudist activists in San Francisco, though he was clothed. DePape, then a hemp jewelry maker who listed himself as a member of the left-leaning Green Party, lived with the couple in Berkeley and was best man at their wedding, the newspaper reported. It said he grew up in Canada.

Scott said the intruder forced his way into the Pelosis’ three-story red brick townhouse through a rear door. Aerial photos showed shattered glass at the back of the house in the city’s affluent Pacific Heights neighborhood.

The chief said police were dispatched for an “A-priority wellbeing check” at about 2:30 a.m. on the basis of a somewhat cryptic emergency-911 call from the residence. Other news outlets reported the call was placed by Paul Pelosi.

Scott credited the 911 operator with discerning that “there was more to this incident than what she was being told” by the caller, thus dispatching the call at a higher priority than normal. Scott called her decision “life-saving.”

According to Scott, police arriving at the front door glimpsed DePape and Pelosi struggling over a hammer. As the officers yelled at both men to drop the tool, DePape yanked the hammer away and was seen striking Pelosi at least once, the chief said. The officers then tackled, disarmed and arrested DePape, Scott said.

The incident came a day after New York City police warned that extremists could target politicians, political events and polling sites ahead of the elections.

The U.S. Capitol Police, which reported 9,625 threats against lawmakers of both parties in 2021, up nearly threefold from 2017, urged congressional offices in a special memo on Saturday to take extra security precautions in light of heightened risks they face.

As a Democratic leader in Washington and a longtime representative from one of America’s most liberal cities, Nancy Pelosi is a frequent target of Republican criticism.

Her office was ransacked during the Jan. 6, 2021, attack on the U.S. Capitol by supporters of Republican then-President Trump, some of whom hunted for her during the assault.