As someone who loved the entirety of 2019’s Modern Warfare reboot, I’m sad to say that, against expectations, I found the MW2 campaign to be largely underwhelming. But its multiplayer – launch woes aside – is the most fun I’ve had playing Call of Duty in ages.

The campaign certainly tries to do new things.

I could draft an entire article about how the gunplay has never felt better, or how Infinity Ward has once again taken big swings to push the core CoD formula forward in meaningful ways. After two extremely predictable premium releases in Black Ops: Cold War (2020) and Vanguard (2021), Modern Warfare 2 feels like returning home. Yes, the current UI is unbelievably rough and the new perk system will cause more balance issues than usual, but its MP core is rock-solid – especially in the selection of maps that don’t feel like three-lane slaughterhouses that actively kill brain cells.

That last statement might be the “nah, I’m done” point for many *** CoD players reading this piece, but bear with me. I’m well aware of the inclination of a good portion of these games’ community towards more traditional three-lane maps with clear lines of sight and easy-to-memorize corners; those are easier to “make work” for competitive play after all. But that’s not what most maps used to feel like in the most beloved CoD entries from the PS3/360 era. 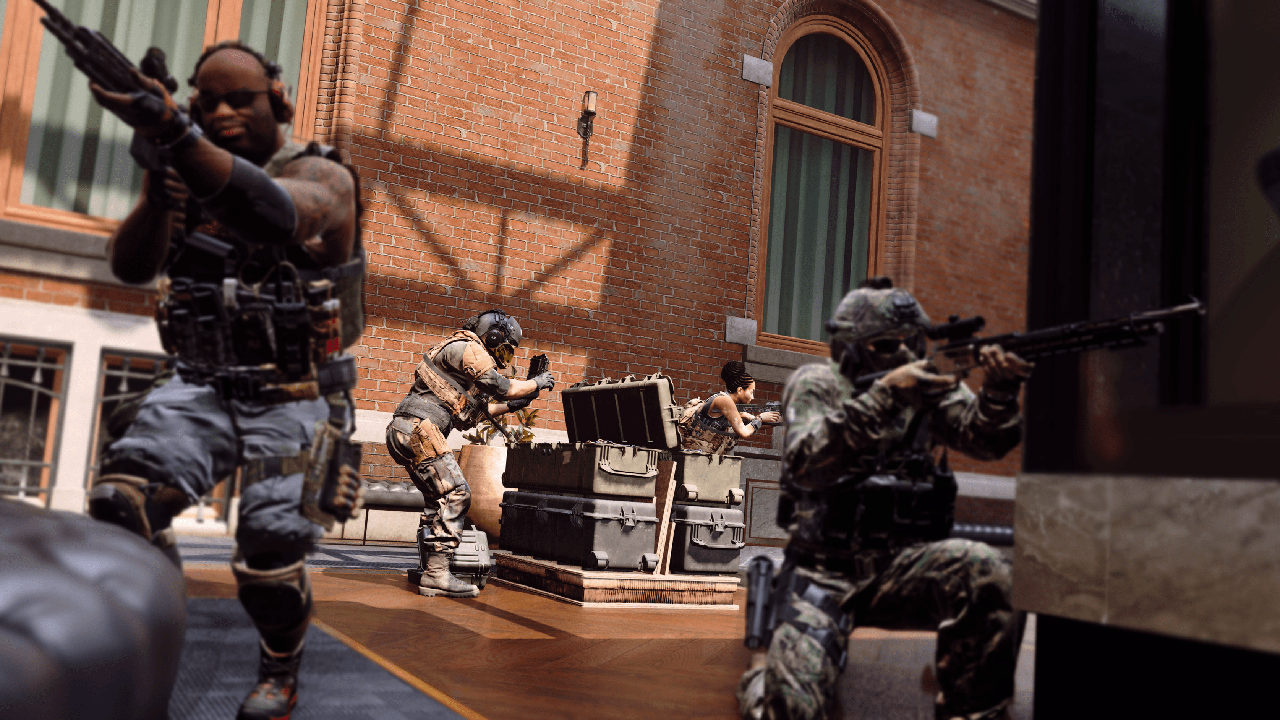 Lawsuits aside, the hotel is a wonderful bit of map design.

Let’s start a brief recap with OG Modern Warfare classics Crash and Crossfire, for example. Those maps felt nothing alike (aside from the abundance of camping spots). Action in the former frothed-up around a crashed helicopter and multiple dangerous buildings, and the latter encouraged a more cautious playstyle and long-range engagements. Maps such as Showdown and Vacant (or the madness that was – and still is – Shipment) took care of “run n’ gun” matches. And we all were totally okay with that.

If we push onwards to Modern Warfar 2 (2009), Modern Warfare 3, and the earlier Black Ops entries, there’s a clear and sustained progression from the aforementioned type of map design to levels with stronger visual identities – but samey pacing that pushed clear-cut venues with little to no space to manoeuvre to the front. Push back, push forward, or try to hold a position which isn’t meant to be held. Enemy spawns screwed you as soon as possible. Cover was limited. Rinse, repeat. Taking cover in MW2 means the difference between keeping your scalp or losing it.

As stated above, many have argued Call of Duty is at its best when it stomps out campers and more defensive players. And that note has dominated map design for the core MP experiences of the franchise for the better part of the last decade. Regardless of class builds and different gun customization options more recetn entries have been thumbing into any available gap, the indirect message has always been “well, CoD is meant to be played this way.” And that kind of sucked.

This philosophy probably peaked with 2018’s fourth Black Ops entry, which dropped the campaign (one of the franchise’s biggest mistakes ever) and embraced a MOBA-like identity that wasn’t nearly as engaging as Overwatch makes it.

The “soldiers are now heroes with ults” approach that worked decently in Black Ops 3 took over the entire game, and that included an unbearably long TTK – sorry, I don’t want my military shooters to play like Unreal Tournament – and the most restrictive and simple maps in the entire franchise. Any graphical complexity found in those was just a pretty cover for level geometry and overall design that felt like playing the earliest versions of Counter-Strike, at best. 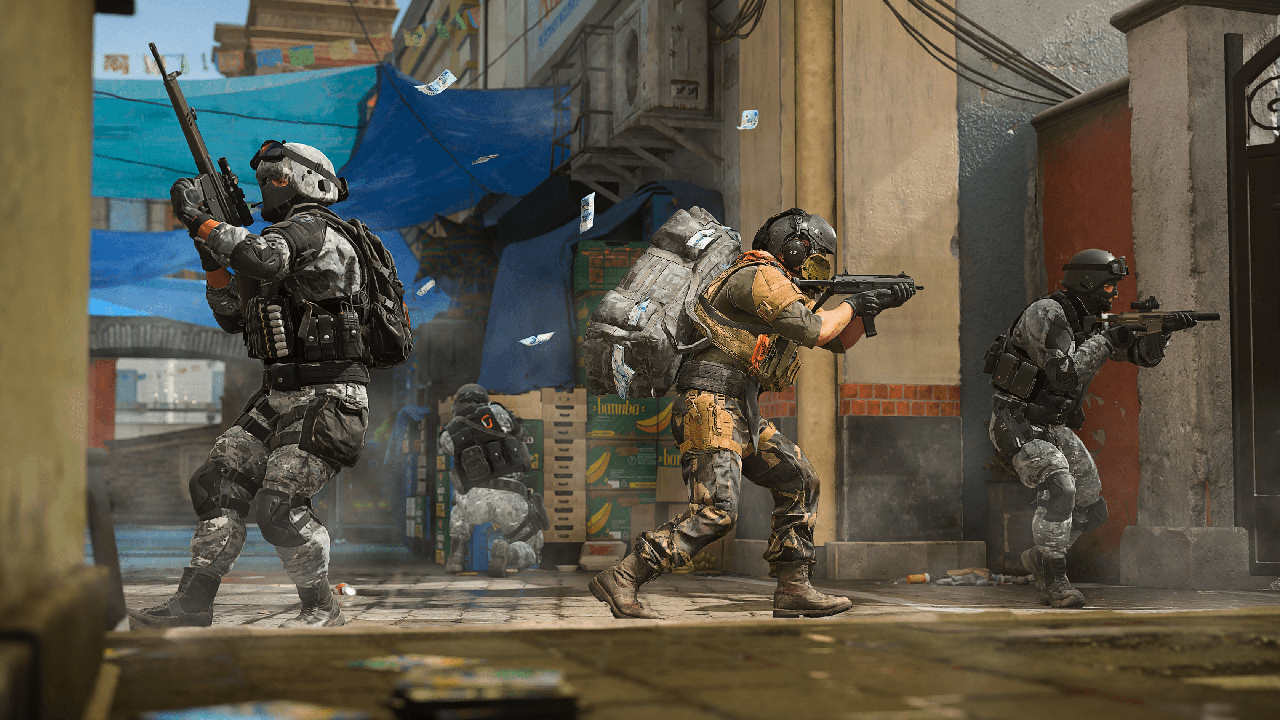 Learning all the corners and crooks is, once again, a joy in MW2.

Thankfully, the Modern Warfare reboot turned things. With the (soft) reboot, mpas started to get some personality back again; they’d arrive with actual verticality, they weren’t afraid of dumping symmetry, and they gave us all more freedom of movement by promoting updated mechanics (night vision, footsteps) and forcing us into all the nooks and crannies we needed to crawl back to when the pressure got too much. You could once again top the scoreboard skulking around with a sniper and claymores, or by running around like a headless chicken with your SMG of choice… Unless you were playing its remaster of Shipment, of course.

Military shooters can feel vastly different, and that’s good. But I strongly believe they shouldn’t forget where they come from or what their place inside the evergrowing FPS environment is. By welcoming back some its more tactical roots, Call of Duty has regained much of its lost value. I still think Treyarch and Sledgehammer aren’t as okay with the slower-paced gameplay as Infinity Ward, but the fact the latter studio is spearheading development of the next generation of CoD (after defining the last three years with its 2019 release) gives those teams’ choices plenty of weight. 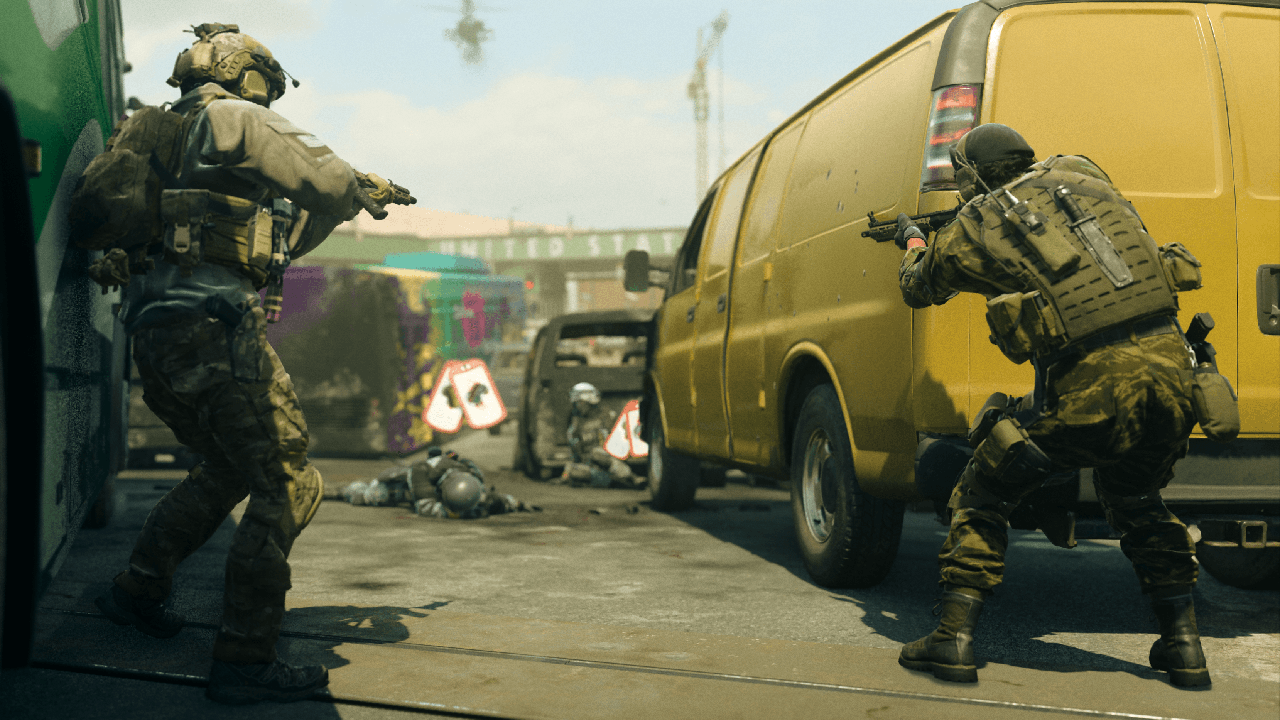 Even the literal lanes of the highway map feel more creative than some CoD maps.

I know, I know… CoD gameplay isn’t what you’d typically describe as tactical – its strong trickshotter, super-tryhard DNA isn’t going anywhere – but there’s a great difference between the average Black Ops 4 match and Modern Warefare 2’s 6v6 encounters. As fast-paced as they are, both the available equipment options and the maps accommodate playstyles that were lost long ago. Wide areas are wider, there’s more cover available, rooms to entrench yourselves in. It’s not hard to discern three main lanes in most of them, yet a team can do absolutely okay in kill-centric modes by sticking to secondary routes – which once were deleted altogether – and holding key buildings as checkpoints of sorts, raining fire on unsuspecting strays.

For someone well on his way to 31 years of age and already losing quick FPS reflexes, having the choice to be useful to my team by picking an area of the map and hunkering down with squadmates (Ground War is the best for this) feels oddly rewarding while playing the latest CoD release. Modern Warfare 2 (2022) is still very much a twitch shooter at its core, and chances are high I’ll get smoked in a face-to-face 1v1 encounter, but I appreciate having options to outsmart my opponents with the environment. Battlefield does Battlefield best, but the fact much of its DNA has been successfully injected into Modern Warfare 2 – and this applies to smaller game modes as well – makes me optimistic about the franchise’s future once again. 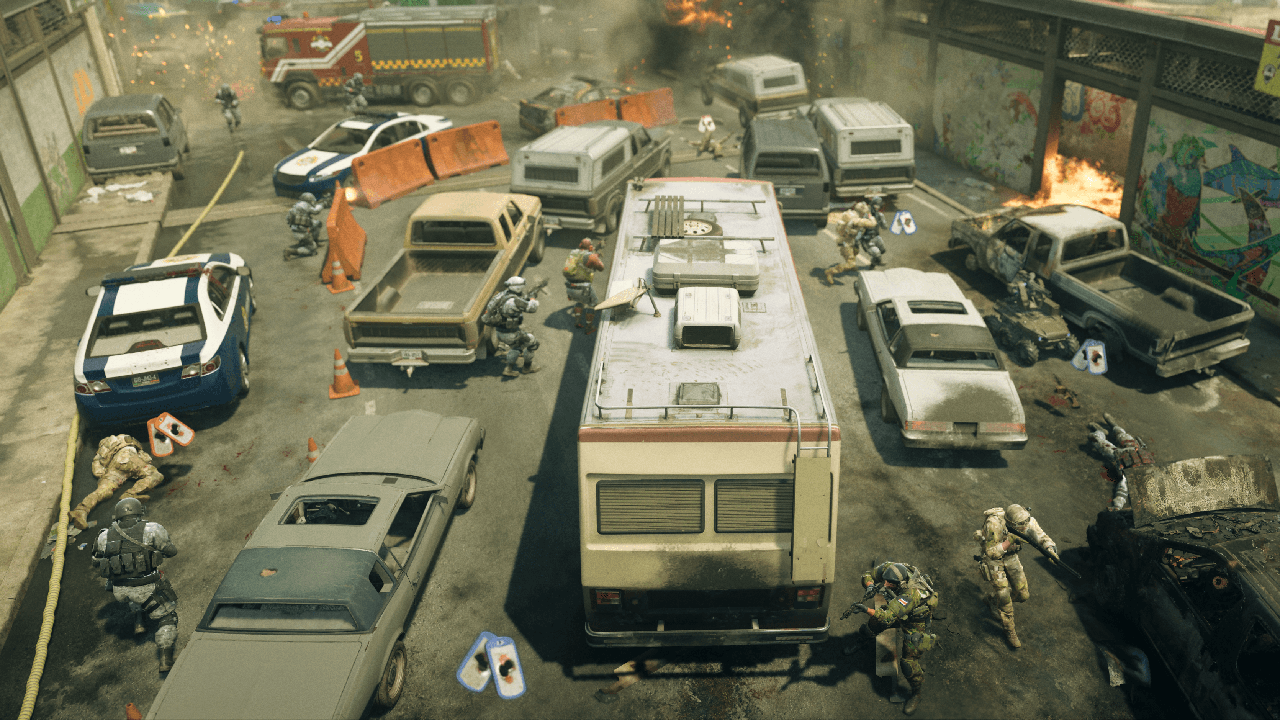 Santa Seña – both in its small and huge versions – may be the best example of MW2’s map design; the three main lanes are quite clear as its centre is a wide highway, with two straight secondary roads (and roofed pathways) to the sides. But the big twist is that it’s completely full of abandoned cars that are both explosive hazards and the perfect cover to lay low and ambush enemies.

Third-person TDM matches – the overall feeling changes a lot once you can peek with the camera around corners and above obstacles – in Santa Seña are some of the most tense CoD experiences I can remember, as checking every trashed car and opening suddenly becomes the highest priority to stay on top of the scoreboard. 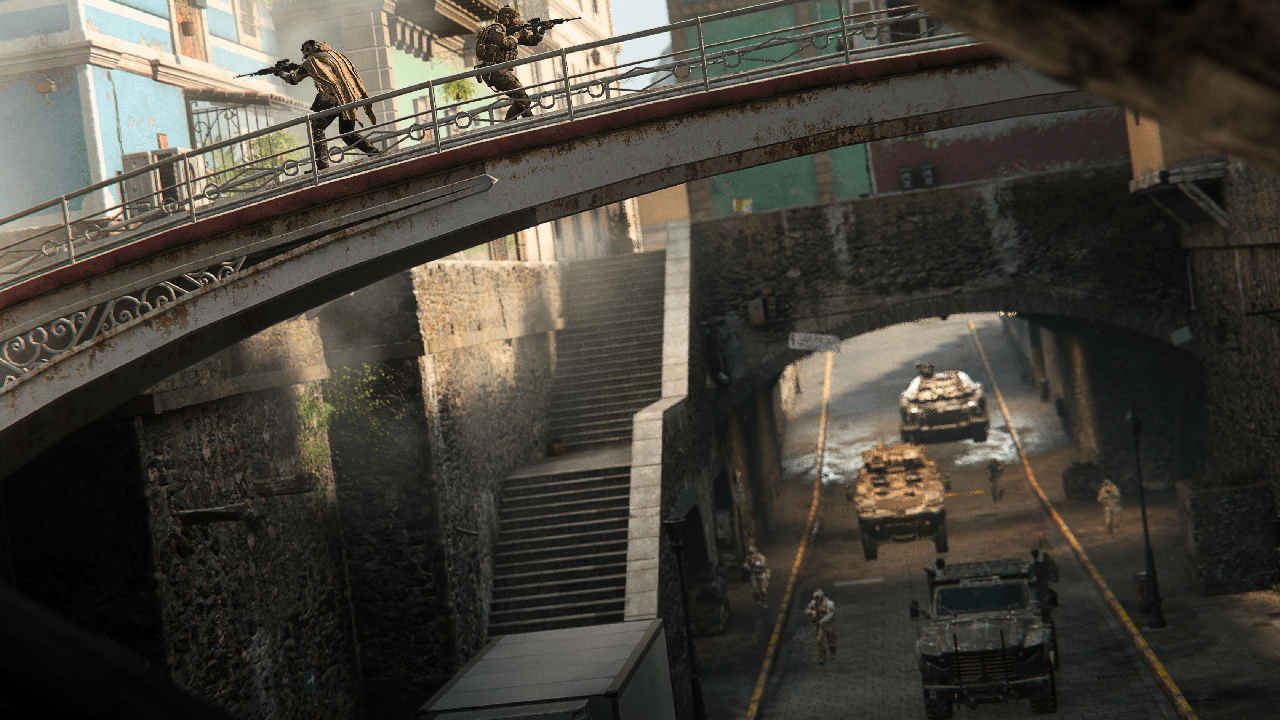 The knowing verticality of the new maps is refreshing, and fun.

Ground War and Invasion maps also feature a more varied geography that feels both natural and more playful. Moreover, almost every building can be a death trap now, and special attention has been given to the high ground, with most capture points now being vulnerable to fire from almost every direction and height. Check those windows!

As we move into Season 1 and beyond – it seems like this game will have to hold the fort past 2023 – with Warzone 2.0, new maps, and much more, I hope Modern Warfare 2 doesn’t forget about what makes it special and refreshingly attractive for players that had taken a long nap from Call of Duty.