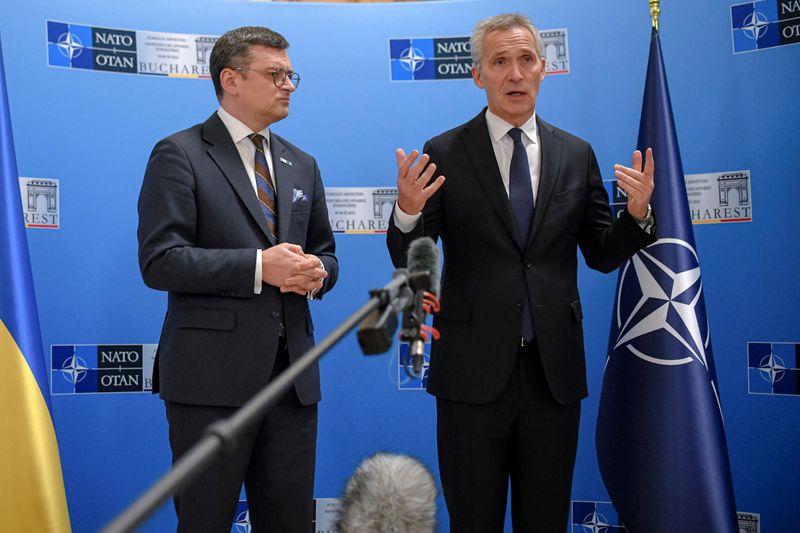 By John Irish and Luiza Ilie

BUCHAREST (Reuters) -NATO foreign ministers will on Wednesday seek to reassure fragile countries in Russia’s neighbourhood that they fear could be destabilised by Russia as the conflict in Ukraine drags on, squeezing energy supplies and pushing up prices.

“The reason we are having this gathering is a signal from us on how important it is to create stability not just for NATO countries but beyond,” Netherlands foreign minister Wopke Hoekstra said on arrival for a second day of talks in Bucharest.

NATO allies on Tuesday pledged more help to Ukraine to repair energy infrastructure heavily damaged by Russian bombardments in what the defence alliance’s chief said was Moscow using the winter weather as “a weapon of war”.

“We will take further steps to help them protect their independence, and strengthen their ability to defend themselves,” he said, adding it was in NATO’s interest to ensure their safety.

Estonian Foreign Minister Urmas Reinsalu told reporters that NATO wanted to be ensure that, after the war in Ukraine, Russia would have “no chance to dictate security options and a way of life to its neighbours”.

Moldova, wedged between Ukraine and Romania, last week warned its people to brace for a harsh winter as it was facing an “acute” energy crisis that risked stoking popular discontent.

It has also faced an unresolved separatist conflict for 30 years. A contingent of Russian peacekeepers is based in mainly Russian-speaking Transdniestria that borders southwestern Ukraine.

Russian-backed separatists control two breakaway regions of Georgia – Abkhazia and South Ossetia. In 2008, Russia said they were under threat from the Georgian government and briefly invaded other parts of Georgia.

Bosnia has been going through its worst political crisis since the end of the Balkan wars of the 1990s, with Bosnian Serbs challenging state institutions as part of their longtime bid to secede, emboldened by at least tacit support from Russia.

Bosnian Foreign Minister Bisera Turkovic, invited to join the NATO meeting, said she was concerned about Russia’s intentions for her country.

“We have Russian proxies in our government and division in our country is deep,” she said.

European leaders worry that countries on the continent’s southern and eastern fringes will lose patience waiting for membership of the European Union and NATO, leaving them open to Russian and Chinese efforts to gain influence, and vulnerable to instability.

“The stability in western Balkans is important for peace,” Italian Minister of Foreign Affairs Antonio Tajani said. “We need to stop the Russians in the western Balkans, we need more Europe.”

NATO ministers will also talk about how to strengthen the resilience of society, days after Stoltenberg warned Western nations must be careful not to create new dependence on China as they wean themselves off Russian energy supplies.