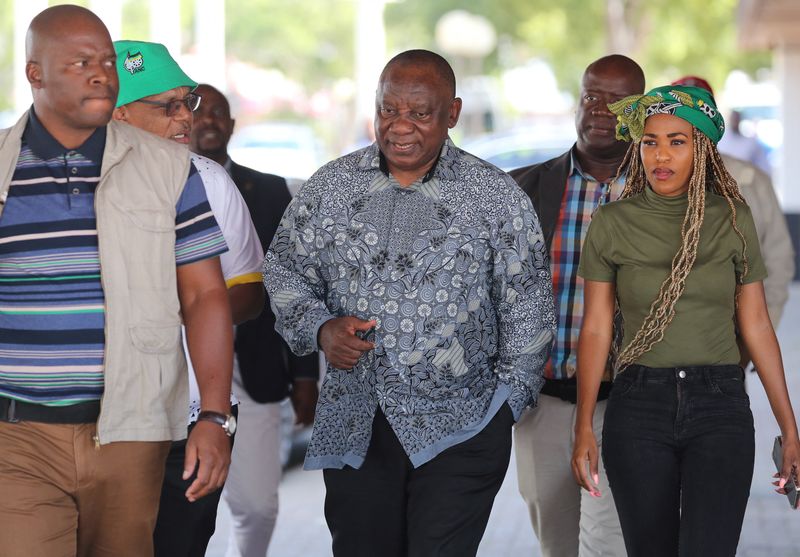 JOHANNESBURG (Reuters) -South African President Cyril Ramaphosa on Monday filed court papers challenging a report by a panel of experts that found preliminary evidence he may have committed misconduct and violated the constitution.

The panel appointed by the speaker of parliament probed allegations that large sums of foreign currency were hidden at Ramaphosa’s private game farm and he failed to report the money missing when it was stolen in 2020.

Ramaphosa has denied wrongdoing and has not been charged with any crimes. The existence of the cash at the Phala Phala game farm and his failure to report the theft to police only surfaced in June in a scandal dubbed “Farmgate” by the media.

The president has said the money was much less than the $4 million to $8 million reported, and that it was the proceeds of game sales at the farm.

A copy of court papers filed by Ramaphosa’s lawyers in the constitutional court showed Ramaphosa wanted the panel report “reviewed, declared unlawful and set aside”.

Ramaphosa also wants any steps taken by the lower house of parliament, the National Assembly, over the panel report to be declared unlawful and invalid, the papers showed.

The National Assembly is set to debate the report on Tuesday.

“The purpose of this application is to review and set aside the report,” the president sails in his sworn statement to the Constitutional Court.

“I submit that the panel misconceived its mandate, misjudged the information placed before it and misinterpreted the four charges advanced against me,” Ramaphosa said.

ANC Treasurer-General Paul Mashatile said after ANC’s meeting on Monday that the decision to back Ramaphosa was not unanimous as there was a lot of debate, but expected the party to vote against the report on Tuesday.

He said the NEC had weighed everything and had decided that its move was taken in the best interest of the country. He said members of the NEC had agreed “outright” that the president could challenge the report.