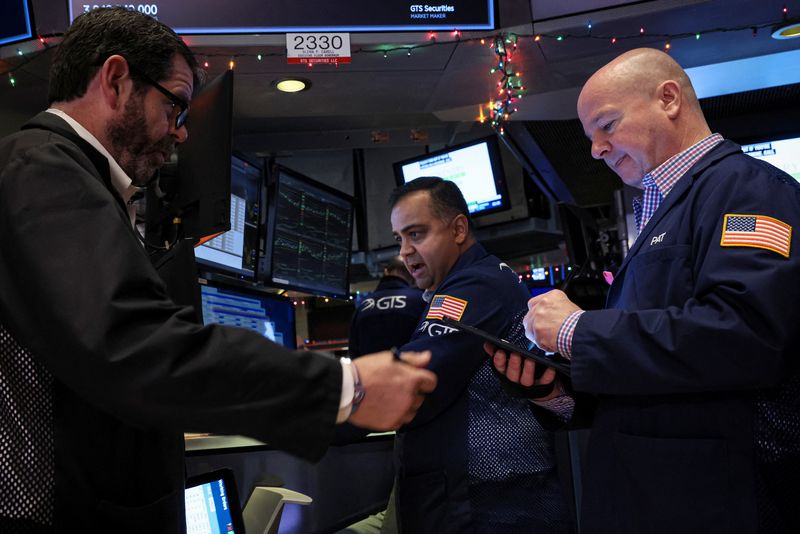 (Reuters) – The closed higher on Thursday, snapping a five-session losing streak, as investors pushed the index higher after interpreting data showing a rise in weekly jobless claims as a sign the pace of interest rate hikes could soon slow.

Wall Street’s main indexes had come under pressure in recent days, with the benchmark index shedding 3.6% since the beginning of December on expectations of a longer rate-hike cycle and downbeat economic views from some top company executives.

Such thinking had also weighed on the tech-heavy Index, which had posted four straight losing sessions prior to Thursday.

However, investors drew some comfort after data showed the number of Americans filing claims for jobless benefits increased moderately last week, while unemployment rolls hit a 10-month high toward the end of November.

The report follows data last Friday that showed U.S. employers hired more workers than expected in November and increased wages, spurring fears that the Fed might stick to its aggressive stance to tame decades-high inflation.

“The market has to adjust to the fact that we’re moving from a stimulus-based economy – both fiscal and monetary – into a fundamentals-based economy, and that’s what we’re grappling with right now,” said Wiley Angell, chief market strategist at Ziegler Capital Management.

The producer price index and the University of Michigan’s consumer sentiment survey on Friday and November’s consumer price data next week will also be in focus ahead of Fed’s policy decision on Dec. 14.

The U.S. central bank has raised its policy rate by 375 basis points this year, the fastest pace since the 1980s.

This aggressive approach has stoked worries of a recession, with top executives of major U.S. financial institutions including JPMorgan (NYSE:), BlackRock (NYSE:) and Citi forecasting a likely economic downturn in 2023.

Adding to the fears, the yield curve between the 2-year and has also widened in the recent days.

Most of the 11 major S&P 500 sectors rose, led by a gain in technology stocks.

The energy index was one of the exceptions despite Exxon Mobil Corp (NYSE:) gaining after announcing it would expand its $30-billion share repurchase program. The sector had been under pressure in recent sessions as commodity prices slipped: is now hovering near its level at the start of 2022.

Meanwhile, Moderna (NASDAQ:) Inc advanced after the U.S. Food and Drug Administration authorized COVID-19 shots from the vaccine maker that target both the original coronavirus and Omicron sub-variants for use in children as young as six months of age.