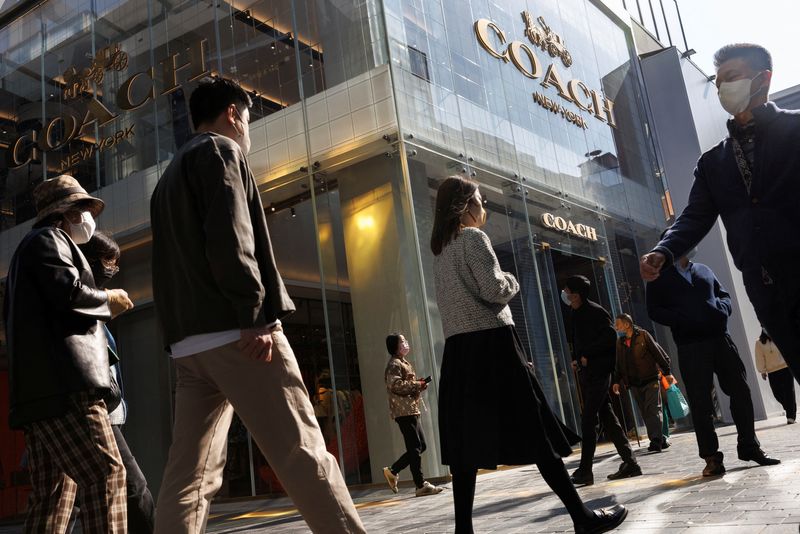 © Reuters. People walk past a store of the Coach luxury fashion retailer in a shopping district in Beijing, China, October 19, 2022. REUTERS/Thomas Peter

SHANGHAI (Reuters) – Baoji, an industrial city in northwest China with a population of 3 million, doesn’t conform to most people’s idea of a luxury goods market. Sometime soon, however, it will be home to a store for American brand Coach .

The store is one of 30 in China that Coach parent Tapestry (NYSE:) Inc is looking to open in the coming 12 months, the company’s Asia Pacific president Yann Bozec told Reuters.

Tapestry’s planned expansion in China is unusual, both for the company’s willingness to tap lower-tier cities where most Western competitors are reluctant to tread, as well as for its timing – coming as it does amid a deep slump in Chinese luxury sales. It also follows some 60 Tapestry store openings in China over the last two years.

It’s a business strategy that analysts say allows Tapestry, one of the largest luxury retailers in China, to capitalise on its position as a purveyor of so-called “accessible luxury” at a time when many higher-end labels have gone further upmarket and Chinese consumers have become more cost-conscious.

Brands from Louis Vuitton to Gucci and Burberry have an established presence in China’s biggest metropolises such as Beijing and Shanghai as well as second-tier cities like Wuhan and Xi’an.

In contrast, cities on the lower end of tier rankings – determined by metrics such as economic output, consumer behaviour and population size – have been shunned, seen by many brands as lacking the luxury malls that their cachet of exclusivity demands.

But where a Louis Vuitton bag or a Gucci dress can sell for thousands of dollars, Tapestry’s price points are lower. Coach largely sells bags below $1,000 while Kate Spade, another Tapestry brand, prices its dresses at around several hundred dollars.

Baoji will be Tapestry’s second foray into a fourth-tier city after it opened a Coach store two years ago in Daqing, a city in the northeast known as the “oil capital of China”. Tapestry also plans to look at other tier-four cities as candidates for the 30 new stores this financial year.

“A lot of our existing customers are already from tier-three, tier-four cities, so we believe there is a cluster there that will get us scale. We never want to be exclusive or selective, we want to be close to where our customers are,” Bozec said.

China’s border closures throughout the pandemic diverted much luxury spending that would have taken place overseas back home. The domestic market doubled in two years to be worth 471 billion yuan ($65 billion) in annual revenue in 2021, according to Bain & Co data.

But luxury sales in China are now cratering – with consumer sentiment hit hard by the country’s zero-COVID policy and frequent lockdowns, a slowing global economy as well as regulatory crackdowns on sectors that have led to spikes in youth unemployment.

Tapestry has not been immune. It saw China sales slide 32% for the quarter ended July 2 from the same period a year earlier. China sales generally account for around a fifth of its overall sales.

“We know COVID is making things unpredictable, but nevertheless, our customer studies and our economic research is incredibly optimistic about the long-term growth potential of the China market,” Bozec said.

He declined to comment on investment figures for China – a main growth market as Tapestry seeks to ratchet up global revenue to $8 billion in fiscal 2025 compared to $6.7 billion in the year just ended.

Among Tapestry’s closest competitors, Ralph Lauren (NYSE:) says it is sticking with plans, outlined in 2018, to have 150 stores in Greater China by the end of next April, up from 135 today, with a focus on tier-one cities.

Compared to the past two years, however, most luxury brands have gone silent about new store openings for China.

Michael Kors and Tory Burch – both competitors in the “accessible luxury” segment, did not reply to Reuters requests for comment on their plans in China.

Tapestry also intends to expand its product lines in China, such as adding handbags to its offerings for its third brand Stuart Weitzman.

Another change, in a nod to Chinese consumer tastes, will be the introduction of “livestreaming studios” at some Coach stores to allow customers to broadcast their shopping experience to social media followers, Bozec said.

Analysts see Tapestry’s pursuit of more stores as an opportunity to cement its lead in brand penetration in China.

The company has 360 stores across 80 cities in China. In contrast, Michael Kors-owner Capri Holdings (NYSE:) had 288 stores as of 2020. Tory Burch lists 68 mainland China stores on its website.

Coach’s luxury market share in China is also more than double that of Michael Kors and more than triple that of Ralph Lauren and Tory Burch, according to Euromonitor data.

Oliver Chen, a Cowen analyst, said Tapestry can benefit from price hikes of up to 60% among top-tier luxury brands in recent years that make Coach look more attractive in terms of value.

Coach’s “footprint is still not saturated relative to the opportunity,” he added.