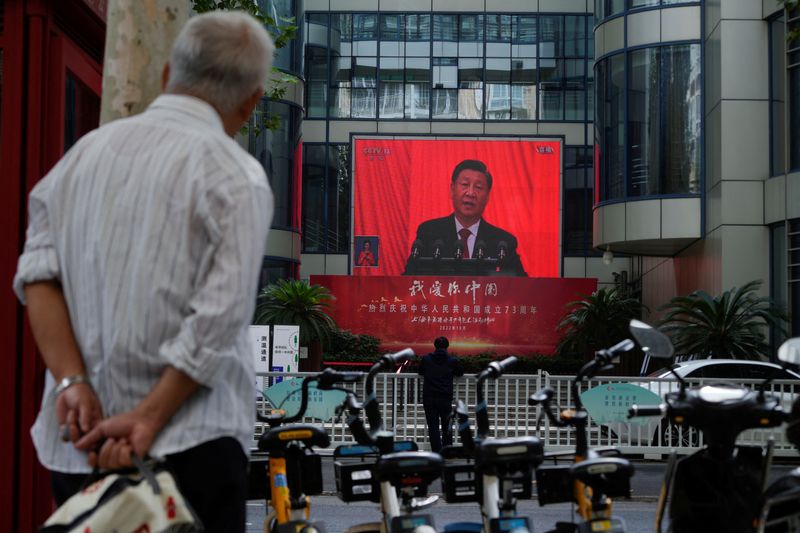 By Eduardo Baptista and Anand Katakam

BEIJING (Reuters) – Xi Jinping emerged from the 20th Communist Party Congress with a precedent-breaking third leadership term and a Politburo Standing Committee made up entirely of loyalists, cementing his place as China’s most powerful ruler since Mao Zedong.

Under Xi’s decade in power, China has undergone profound change, both domestically and within the global context.

Here are some of the ways that China has changed under Xi.

1. Perceptions of China in the West and U.S.-allied countries have worsened

U.S.-China relations have deteriorated sharply in recent years, a decline that accelerated under former U.S. President Donald Trump’s hawkish turn on Beijing. But western perceptions have also been worsened by concerns over human rights as well as China’s increasing aggression towards Taiwan.

Perceptions of China among the West and U.S.-allied countries

Upon taking office, Xi initiated a signature drive to root out corruption within the Communist Party, which has proven popular with the public and which numerous analysts say has also been a useful tool for eliminating political opponents.

3. The taming of once-unruly borderlands

The regions of Tibet, Xinjiang and Hong Kong, all far from Beijing, have long created headaches for China’s ruling Communist Party.

In Xinjiang, that included the internment of an estimated one million minority Muslim Uyghurs in camps; in Hong Kong, Beijing responded to major anti-government protests in 2019 with a sweeping national security law.

4. Turning up the heat on Taiwan

All Chinese leaders since Mao have stressed the importance of “reunifying” China with the self-governed island of Taiwan.

But tensions across the Taiwan strait have sharply increased under Xi, with the People’s Liberation Army increasing its activity around the island in recent years, from military drills to a spike in incursions into the island’s air defense identification zone.

5. The state is increasingly taking the economic lead

Xi has ratcheted up state control and guidance of the economy, including a wide-ranging crackdown on the most free-wheeling sectors of the private sector, especially online platforms and for-profit education.

The clampdown on those sectors, as well as the impact of ongoing COVID-19 restrictions, has pushed up urban unemployment and pushed down consumer confidence.

The era of yearly double-digit growth ended before Xi took office and the rate of growth has been declining, which was inevitable as the size of the economy grows.

Incomes have steadily risen under Xi.

A growing number of analysts warn that China’s investment-heavy, infrastructure-driven model is increasingly unsustainable, with further slowdown ahead.

7. The quashing of dissent, the expansion of censorship

Xi has cracked down on domestic critics and protests, eliminating space for dissent, while censorship inside China’s “Great Firewall” steadily intensifies.

Detention of individuals in secret jails

The People’s Liberation Army, led by Xi, has been closing the gap with the United States, including on the high seas, with major implications for tensions surrounding Taiwan, as China ratchets up its capability to seize the island on what some U.S. officials warn is a shortening timeline.

China’s naval expansion in the past decade

9. China leads on green tech – and in pollution

While China struggles to shake its dependence on coal, it has become the global leader in the manufacture of electric vehicles and won plaudits for its pledge to achieve carbon neutrality by 2060. Most visibly, air quality in China has steadily improved over the past decade.

Xi describes elimination of extreme poverty in China as one of the key Communist Party achievements of the past decade.

Inequality, however, has proven a tougher challenge – especially the gap between urban and rural incomes – something Xi is seeking to tackle with his “common prosperity” policy.

China’s official Gini coefficient numbers show that despite a slight decline in recent years, it still has one of the highest income inequalities among large economies, along with the United States.