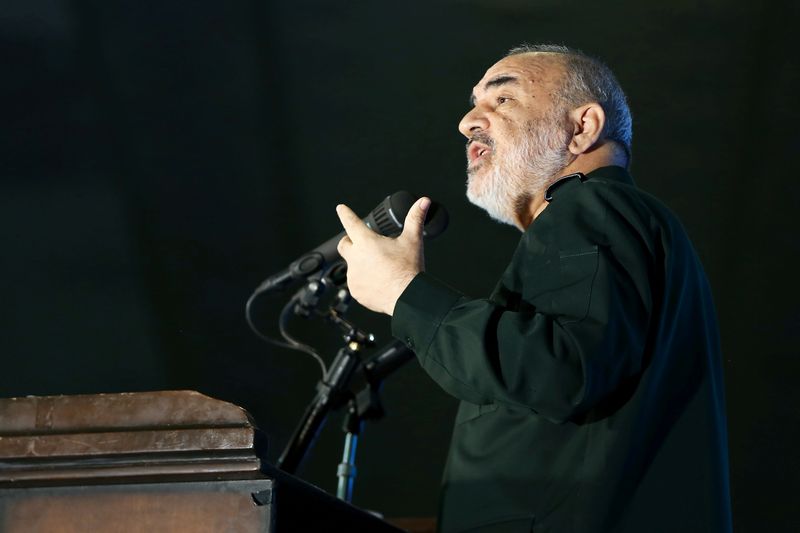 © Reuters. FILE PHOTO: Commander-in-chief of the Islamic Revolutionary Guard Corps Hossein Salami delivers a speech during the forty-day memorial, after the killing of Iran’s Quds Force top commander Qassem Soleimani in a U.S. air strike at Baghdad Airport, at the G

DUBAI (Reuters) -The head of Iran’s powerful Revolutionary Guards warned protesters that Saturday would be their last day of taking to the streets, in the clearest sign that security forces may intensify their already fierce crackdown on widespread unrest.

Iran has been gripped by protests since the death of 22-year-old Kurdish woman Mahsa Amini in the custody of the morality police last month, posing one of the boldest challenges to the clerical leadership since the 1979 revolution.

“Do not come to the streets! Today is the last day of the riots,” Guards commander Hossein Salami said in some of the toughest language used in the crisis, which Iran’s leaders blame on its foreign enemies including Israel and the United States.

“This sinister plan, is a plan hatched … in the White House and the Zionist regime,” Salami said. “Don’t sell your honour to America and don’t slap the security forces who are defending you in the face.”

Iranians have defied such warnings throughout the popular revolt in which women have played a prominent role. There were more reports of bloodshed and renewed protests on Saturday.

Several students were injured, with one of them shot in the head, Hengaw said. Reuters could not verify the report.

Late on Saturday, more protests broke out in the Kurdish town of Marivan, according to social media videos which showed demonstrators starting fires on streets as gunshots could be heard. Reuters could not verify the videos.

The Twitter account @1500tasvir, which has nearly 300,000 followers, posted videos it said showed protesters in the northwestern city of Astara, lighting a bonfire with debris and motorbikes seized from police.

Meanwhile @1500tasvir and other Twitter accounts said security forces had surrounded some campuses, including Mashhad Azad University and the Technical Faculty of Tehran University, to arrest student activists.

In another show of defiance, protesters in the small northern town of Lasht-e Nesha held a loud street rally chanting “Clerics must get lost!,” according to a video on @1500tasvir.

The footage could not be authenticated by Reuters.

The widely feared Revolutionary Guards, an elite force with a track record of crushing dissent, which reports directly to Supreme Leader Ayatollah Ali Khamenei, have not been deployed since demonstrations began last month.

But the warning by Salami suggests Khamenei could unleash them in the face of relentless demonstrations now focused on toppling the Islamic Republic.

Videos posted earlier on social media by activist groups purported to show protests at a number of universities across the country in cities including Kerman, Mashhad, Qazvin, Ahvaz, Arak, Kermanshah, Yazd, Bushehr and a dozen campuses in the capital, Tehran.

The activist HRANA news agency said 272 protesters had been killed in the unrest as of Friday including 39 minors. Some 34 members of the security forces were also killed. Nearly 14,000 people have been arrested in protests in 129 towns and cities and some 115 universities, it said.

A hardline Revolutionary Court began the trials of some of the 315 protesters charged so far in Tehran, at least five of whom are accused of capital offences, the official news agency IRNA reported.

The defendants include a man accused of hitting and killing a police officer with his car and injuring five others, IRNA said. He is charged with “spreading corruption on earth,” an offence punishable by death under Iran’s Islamic laws.

Another man is charged with the capital offence of “moharebeh,” an Islamic term meaning warring against God, for allegedly attacking police with a knife and helping set fire to a government building in a town near Tehran, IRNA added.

The court is headed by Abolghassem Salavati, a judge on whom the United States imposed sanctions in 2019 after accusing him of having punished Iranian citizens and dual nationals for exercising their freedoms of speech and assembly.

Salami issued his warning to protesters as he spoke at a funeral for victims killed in an attack this week claimed by Islamic State.

A man who the militant group said carried out the attack, which killed 15 worshippers at the Shah Cheragh shrine in the city of Shiraz, pledged allegiance to Islamic State in a video posted on its Telegram account on Saturday. Iranian officials said he died from injuries sustained during his arrest.