France had a goal ruled out by VAR for offside in the final minute of stoppage-time as Tunisia held on to register a shock victory.

However, despite victory they failed to qualify for the last 16 of the World Cup.

Substitute Antoine Griezmann volleyed in a dramatic equaliser at the Education City Stadium, but the VAR decision meant Tunisia captain Wahbi Khazi’s brilliant first-half goal proved to be the winner.

However, with Australia recording a 1-0 victory over Denmark in the other match in Group D, Tunisia’s hopes of progressing had been dashed before Griezmann’s goal was ruled out.

“We can be proud and leave with our head high, but it is a bitter victory.

“It would have been beautiful to beat France and reach the last 16. It is our fault for not doing what we needed to do before.”

France are through to the last 16 as group winners having already secured qualification with victory over Denmark in the last game.

Despite their failure to progress, Tunisia captain Khazi produced the moment fans had been waiting for – a goal at this World Cup – when he drove to the edge of the box and coolly rolled it into the bottom right corner.

There was an outpouring of emotion from a large following of Tunisia fans at the stadium, while Tunisian substitutes sprinted onto the pitch in a moment of pure elation.

But their celebrations were shortlived when news of Australia’s lead began to ripple through the stadium, with supporters checking their phones for updates from the other match in Group D.

France, who were much-changed from their 2-1 win over Denmark having already qualified as group winners, lacked quality in a disappointing performance.

Paris St-Germain forward Kylian Mbappe and Atletico Madrid’s Griezmann were brought on later in the second half to try and find a way back into the game.

They had an impact despite loud jeers and whistling from Tunisia fans keen to put them off and Griezmann almost provided the goal they craved.

Didier Deschamps’ side are set to face the runner-up of Group C, currently Argentina, in the last 16 on Sunday, 4 December.

Tunisia’s wait to reach the knockout stages of the World Cup for the first time continues as they exit the competition. 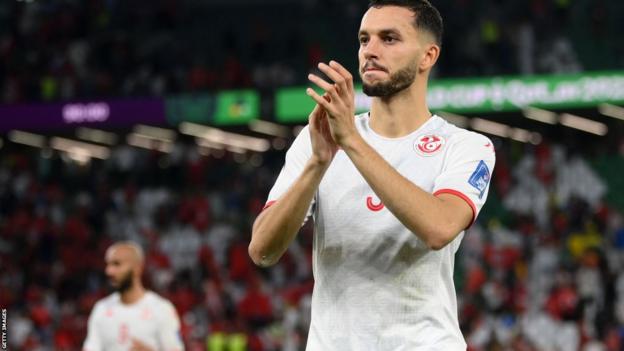 Tunisia knew they needed to win the game to stand any chance of progressing and they started with plenty of intent.

Goalscorer Khazri was a threat, while France defender Eduardo Camavinga was often overloaded out wide and needed support from Liverpool centre-back Ibrahima Konate.

The support for Tunisia far outweighed France and that majority were given a brief outpouring of celebration when Nader Ghandri’s volley flew past goalkeeper Steve Mandanda, only to be ruled out for offside.

As the first half wore on, Tunisia fans’ impatience started to show – though their support remained relentless – as chance after chance came, but goalkeeper Mandanda did not look like conceding.

Then a magical moment from Khazri opened up space for himself on the edge of the box and his low, precise strike beat Mandanga in the bottom corner.

Tunisia fans were full of hope – they were heading into the last 16 as things stood – but two minutes later, Australia’s goal meant it was taken out of their hands.

“I said nothing is impossible. We have been able to win over the world champions,” added Kadri.

“We have been able to prove our efficiency and we did our best. We worked as a team. It wasn’t easy for us to get these four points [in the group stage] but we leave with a lot of honour and pride.”

Deschamps did not waste too much time in the second half to bring on Mbappe and Griezmann and from then on, France were on the front foot.

Tunisia clung on following a series of corners late on, but Griezmann eventually found the back of the net via a deflection.

However, France’s celebrations quickly turned to frustration when the referee went to the pitchside monitor to view VAR and the goal was ruled out.

Player of the match

GOAL OVERTURNED BY VAR: Antoine Griezmann (France) scores but the goal is ruled out after a VAR review.

Eduardo Camavinga (France) wins a free kick in the attacking half.

Kylian Mbappé (France) wins a free kick in the attacking half.

Attempt saved. Kylian Mbappé (France) right footed shot from a difficult angle on the left is saved in the top right corner. Assisted by Eduardo Camavinga.

Ibrahima Konaté (France) wins a free kick in the defensive half.

Attempt missed. Adrien Rabiot (France) left footed shot from the left side of the box misses to the right. Assisted by Ousmane Dembélé with a cross.

February 6, 2023 7
For Syrians Who Endured a Brutal Civil War, an Earthquake Is a Reminder

For Syrians Who Endured a Brutal Civil War, an Earthquake Is a Reminder

February 6, 2023 7
How News of the Earthquake Spread in Gaziantep, the Epicenter

How News of the Earthquake Spread in Gaziantep, the Epicenter