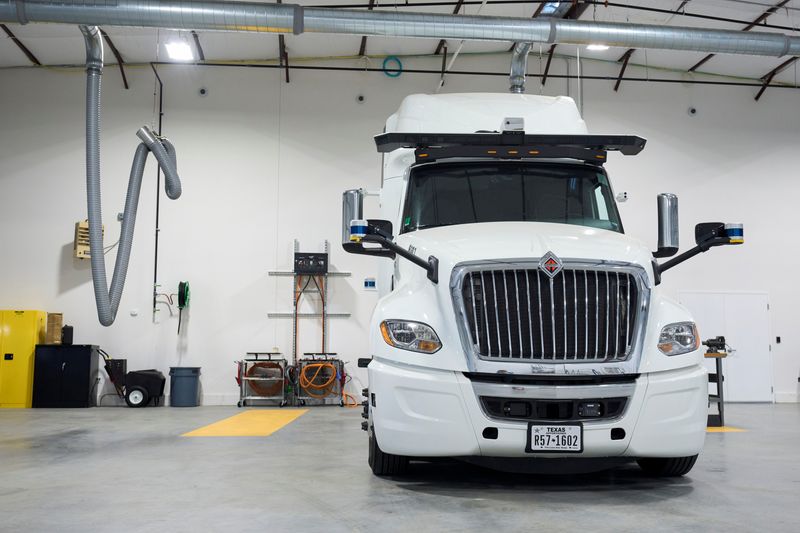 © Reuters. FILE PHOTO: An AV truck is parked in a TuSimple facility at AllianceTexas, a 27,000 acre business complex boasting some of the country’s largest freight operations, in Fort Worth, Texas, U.S., May 18, 2022. REUTERS/Cooper Neill

(Reuters) – TuSimple Holdings Inc’s former chief executive Cheng Lu is returning to the role, days after the self-driving trucking company fired his predecessor following an internal probe that showed some employees had ties and shared information with a China-backed firm.

San Diego, California-based TuSimple also announced late on Thursday that it removed four independent directors and appointed co-founder and major shareholder Mo Chen as executive chairman of the board.

The reshuffle follows an investigation by its board that concluded that some of its employees spent paid hours last year working for Hydron Inc, a startup working on autonomous trucks mostly in China.

TuSimple said the investigation also found that confidential information had been shared with Hydron that was not brought to the attention of audit and government security committees. The Chinese firm was being evaluated as a potential original equipment manufacturer.

“I’m returning as TuSimple’s CEO with a sense of urgency to put our company back on track,” new CEO Lu said in a statement.

Lu replaces Ersin Yumer, the vice president of operations who has been serving as its interim CEO since the board fired Hou on Oct. 31.

In a statement after his firing, Xiaodi Hou denied any wrongdoing and said the move was “without cause.”

Hou, 37, is a co-founder of TuSimple and had been at the helm of the self-driving company since 2018 and led TuSimple during its IPO.