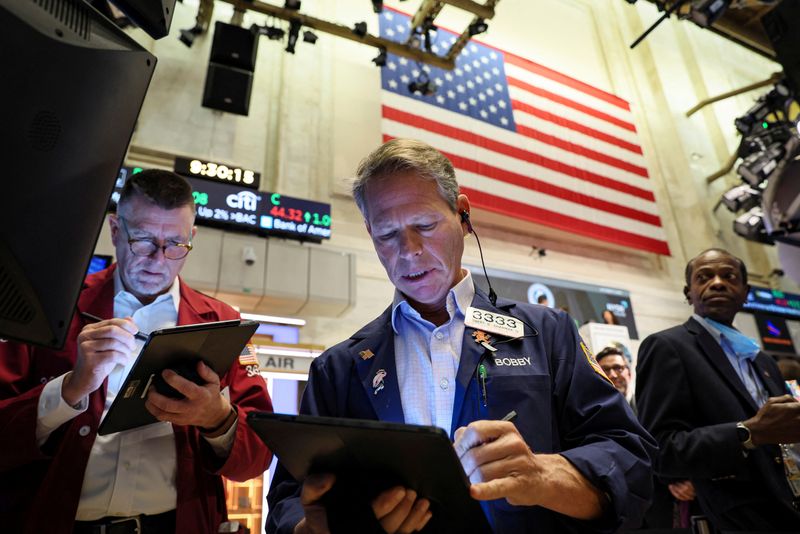 By Noel Randewich and Amruta Khandekar

(Reuters) – Wall Street ended sharply higher Monday as investors focused on Tuesday’s midterm elections that will determine control of Congress, while shares of Meta Platforms jumped on a report of job cuts at the Facebook (NASDAQ:) parent.

Republicans are favored to win a majority in the House of Representatives in the elections, with the Senate rated a toss-up by nonpartisan forecasters. Republicans could use a majority in either chamber to hinder Democratic President Joe Biden’s agenda.

“The likelihood that the Republicans take the House or the Senate is pretty high, therefore guaranteeing some form of gridlock over the next couple of years. That would probably take tax hikes off the table, and any sort of big spending potentially perceived as inflationary off the table,” said Ross Mayfield, an investment strategy analyst at Baird.

Meta Platforms Inc jumped over 6% following a report that the company was planning to begin large-scale layoffs this week. The stock has slumped more than 70% so far this year.

Recently beaten-down shares of Microsoft (NASDAQ:) and Google-parent Alphabet (NASDAQ:) each rallied more than 2% and contributed heavily to the ‘s gain for the session.

Focus this week will also be on U.S. consumer prices data for October, due out on Thursday, for clues about how much the U.S. Federal Reserve’s rapid interest rate hikes are helping cool down the economy.

Four Fed policymakers on Friday indicated they would consider a smaller rate hike at their next policy meeting, despite new data showing another month of robust job gains and only small signs of progress in lowering inflation.

Traders are divided about whether the Fed will raise interest rates by 50 basis points or 75 basis points at the U.S. central bank’s meeting in December.

“All else equal, whether the terminal rate sits at 4.5%, 5% or beyond, monetary policy is poised to have a negative effect on the economy heading into 2023,” Glenmede’s investment strategists wrote in a note on Monday.

All the three major U.S. indexes have slumped this year, with the tech-heavy Nasdaq down 33% due to worries that aggressive monetary policy tightening could cripple the U.S. economy.

Walgreens Boots Alliance (NASDAQ:) Inc gained 4.1% after VillageMD, a primary care provider backed by the pharmacy chain, said it will acquire Summit Health in a deal valued at nearly $9 billion.

Advancing issues outnumbered falling ones within the S&P 500 by a 2.8-to-one ratio.

Volume on U.S. exchanges was relatively light, with 10.5 billion shares traded, compared to an average of 11.8 billion shares over the previous 20 sessions.