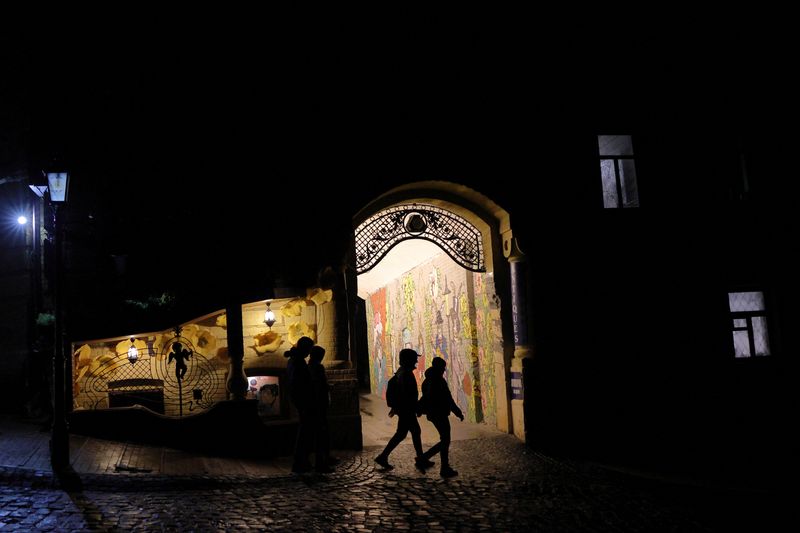 KYIV (Reuters) -Ukraine doubled down on its tough stance on negotiations with Russia on Tuesday, saying talks could only resume once the Kremlin relinquishes all Ukrainian territory and that Kyiv would fight on even if it is “stabbed in the back” by its allies.

The remarks come days after a U.S. media report that Washington had encouraged Kyiv to signal willingness for talks, and seemed aimed at rebuffing such pressure, at a time when U.S. mid-term elections could test Western support for Ukraine.

In an overnight address before he was due to address world leaders at a climate summit, President Volodymyr Zelenskiy said Russia must be pushed into “genuine” negotiations.

“Once again – restoration of territorial integrity, respect for the U.N. Charter, compensation for all damages caused by the war, punishment of every war criminal and guarantees that this will not happen again. These are completely understandable conditions.”

Since Russia announced the annexation of Ukrainian territory at the end of September, Zelenskiy has decreed that Kyiv would never negotiate with Moscow as long as Vladimir Putin remains Russian president. Kyiv officials have repeated that position in recent days, while saying that Kyiv would be willing to negotiate with Putin’s future successor.

“Negotiating with Putin would mean giving up, and we would never give him this gift,” Zelenskiy adviser Mykhailo Podolyak said in an interview with Italy’s La Repubblica newspaper published on Tuesday.

Dialogue would be possible only once Russian forces leave Ukrainian territory, Podolyak said.

“We have no choice. Russia has invaded us with mobile crematoria and half a million body bags. If we stop defending ourselves, we will cease to exist. Literally. Physically. We will continue to fight even if we are stabbed in the back,” he said.

Oleksiy Danilov, secretary of Ukraine’s Security Council, also tweeted that restoration of Ukraine’s borders was a pre-condition for talks, and that Kyiv needed the “guarantee” of modern air defences, aircraft, tanks and long-range missiles.

On Monday, Kremlin spokesman Dmitry Peskov repeated Moscow’s position that it is open to talks but that Kyiv was refusing them. Moscow has repeatedly said it will not negotiate over territory it claims to have annexed from Ukraine.

Ukrainian forces have been on the offensive in recent months, while Russia is regrouping to defend areas of Ukraine it still occupies, having called up hundreds of thousands of reservists over the past month.

Russia has been evacuating civilians from occupied areas, especially from southern Ukraine’s Kherson region, in an operation that Kyiv says includes forced deportations, a war crime. Moscow says it is taking people to safety.

The next big battle is expected to be over a Russian-controlled pocket of land on the west bank of the Dnipro River, which includes Kherson city, the only regional capital Russia has captured since its invasion in February.

Britain’s Ministry of Defence said on Tuesday Russia was preparing new fortified lines of defence inside territory it controls “to forestall any rapid Ukrainian advances in the event of breakthroughs”.

This includes installing concrete barriers known as “dragon’s teeth” to stop tanks. It said these were being put in place around Russian-occupied Mariupol in the south to help safeguard Russia’s “land bridge” to occupied Crimea, a strategic objective, even if Moscow loses other territory.

On Monday, a source confirmed that White House National Security Advisor Jake Sullivan had held talks with Russian officials to avert escalation of the conflict, first reported by the Wall Street Journal. The Kremlin has declined to comment.

The White House did not deny the talks but says it will not make diplomatic moves about Ukraine without Kyiv’s involvement.

“We reserve the right to speak directly at senior levels about issues of concern to the United States. That has happened over the course of the past few months. Our conversations have focused only on … risk reduction and the U.S.-Russia relationship,” White House spokesperson Karine Jean-Pierre said.

The United States is holding mid-term elections for Congress on Tuesday. Although most candidates from both parties support Ukraine, some right-wing Republican candidates have criticised the cost of U.S. military aid.

White House spokesperson Jean-Pierre said U.S. support for Ukraine would be “unflinching and unwavering” regardless of the outcome of Tuesday’s vote.

Oleksandr Merezhko, the head of Ukraine’s parliamentary foreign policy committee, said a Republican victory “will not in any way impact on support for Ukraine”.

“We highly value the fact that we have bipartisan support,” he said. “Whoever wins these elections, this will not have any negative influence. On the contrary, we expect that support for Ukraine will increase.”

On Monday, Yevgeny Prigozhin, a Putin ally who heads the Wagner private military company fighting in Ukraine, acknowledged for the first time that Russia had intervened in U.S. elections in the past, and said it would do so again.

“We have interfered, we are interfering and we will continue to interfere,” he said on Facebook (NASDAQ:).

U.S. prosecutors accuse Prigozhin of leading a Russian internet “troll farm” that helped back former president Donald Trump during the 2016 presidential election. Trump denies his campaign coordinated with the Russians.