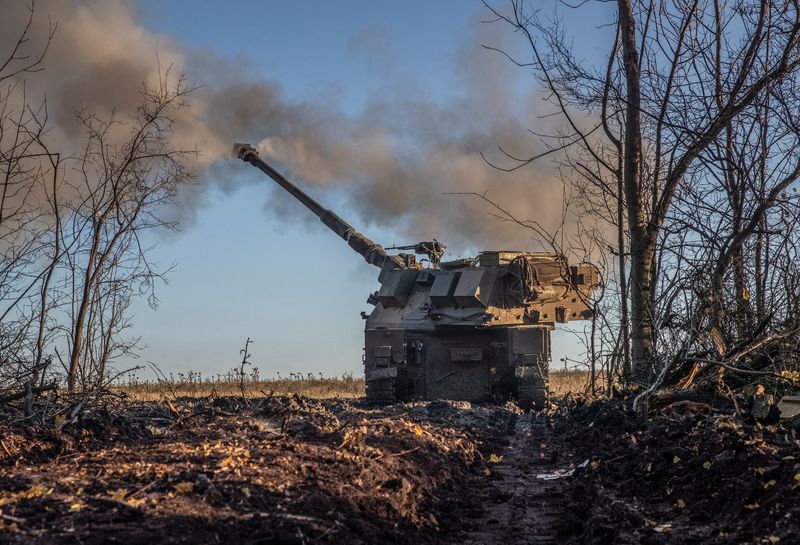 KYIV (Reuters) – Ukraine President Volodymyr Zelenskiy on Tuesday night said his forces would not yield “a single centimetre” in fighting for control of eastern Donetsk region after earlier insisting that restoration of Ukrainian territory and compensation from Russia were conditions under which peace talks could take place.

In a video address, Zelenskiy also said that around 4 million people were without power in 14 regions plus the capital Kyiv, but on a stabilization rather than an emergency basis.

Russian missile and drone attacks have targeted Ukraine’s energy infrastructure in the past few weeks as winter approaches when mean temperatures typically drop to several degrees below zero Celsius (32 Fahrenheit) and lows of -20 Celsius.

The focal points of the conflict in the industrial region of Donetsk are around the towns of Bakhmut, Soledar and Avdiivka, the theatre of the heaviest fighting in the country.

“The activity of the occupiers remains at an extremely high level – dozens of attacks every day,” Zelenskiy said.

“They are suffering extraordinarily high losses. But the order remains the same – to advance on the administrative boundary of Donetsk region. We will not yield a single centimetre of our land.”

The region is one of several Russia claimed to have annexed in late September, seven months after invading its neighbour. Moscow has said it will not negotiate over territory it claims.

Zelenskiy’s remarks earlier about conditions for talks followed a Washington Post report on Saturday that the United States had encouraged Ukraine to signal willingness for talks. Zelenskiy’s comments also coincided with U.S. midterm elections whose outcome could test Western support for Ukraine.

“Once again – restoration of territorial integrity, respect for the U.N. Charter, compensation for all damages caused by the war, punishment of every war criminal and guarantees that this will not happen again,” he said were the Ukrainian conditions.

Since Russia announced the annexations, Zelenskiy has said that Kyiv would never negotiate as long as Vladimir Putin was Russian president.

Ukrainian forces have been on the offensive in recent months, while Russia is regrouping to defend areas of Ukraine it still occupies, having called up hundreds of thousands of reservists over the past month.

Russia has been evacuating civilians from occupied areas, especially from southern Ukraine’s Kherson region, in an operation Kyiv says includes forced deportations, a war crime. Moscow says it is taking people to safety.

On Tuesday night, a Ukrainian military statement accused Russian troops of continuing to loot and destroy infrastructure in Kherson, where a showdown has been looming for weeks in the only regional capital Russia has captured since its invasion.

“On 7th November, a convoy of trucks passed over the dam of the Kakhova hydroelectric station loaded with home appliances and building materials,” the statement said.

Russian forces were dismantling mobile phone towers and taking away equipment, it said.

In an area near the city of Beryslav, Russian forces “blew up a power line and took equipment from a solar power station.”

In Kherson city, it said Russian troops removed exhibits, furniture and equipment from a museum devoted to artist Oleksiy Shovkunenko, known for his paintings of portraits and landscapes.

Russian artillery hit more than 30 settlements in Kherson and Mykolaiv regions, and in Zaporizhzhia region the Russian-installed authorities were forcing residents to accept Russian passports after seizing their Ukrainian documents, the statement said.

Reuters was not able to verify the Ukrainian reports.

Britain’s Ministry of Defence said Russia was preparing new fortified lines deep inside territory it controls “to forestall any rapid Ukrainian advances in the event of breakthroughs”.

This involved installing concrete barriers known as “dragon’s teeth” to stop tanks, including near Mariupol in the south to help safeguard Russia’s “land bridge” to occupied Crimea even if Moscow loses other territory.

Meanwhile, most candidates in Tuesday’s U.S. midterm elections, Democrats and Republicans, support Ukraine. But some right-wing Republicans have criticised the cost of military aid.

Regardless of the vote’s outcome, U.S. support for Ukraine would be “unflinching and unwavering”, White House spokesperson Karine Jean-Pierre said.

Separately, Zelenskiy called on Tuesday for an extension to the Black Sea grain export deal that lifted a Russian blockade of three major Ukrainian ports and eased a global food crisis.

The accord, brokered by Turkey and the United Nations in July, expires on Nov. 19 and looked in jeopardy last month when Russia briefly suspended its participation before rejoining it.

Ukraine is one of the world’s top grain producers. Ukraine also wants the grain export deal expanded to include more ports and goods and hopes a decision to renew the pact for at least a year will be taken next week, the deputy infrastructure minister said in a Reuters interview.