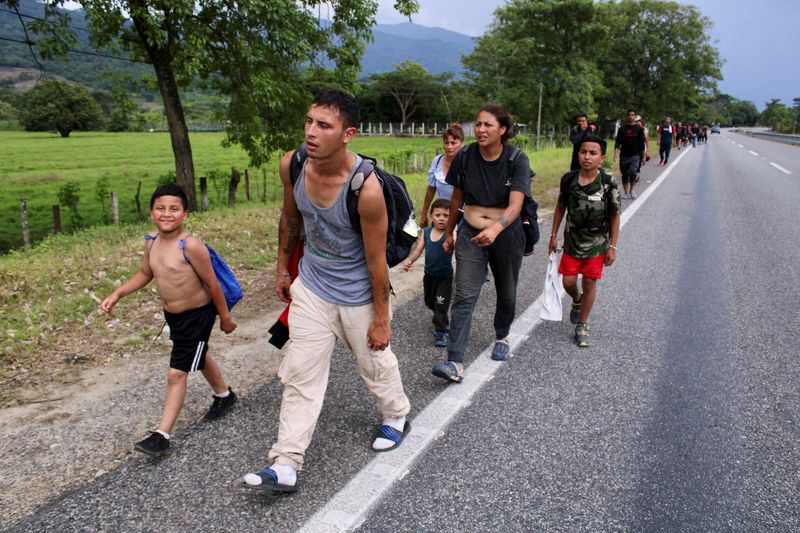 © Reuters. FILE PHOTO – Migrants from Venezuela walk in a caravan to the U.S.-Mexico border where hundreds of others are stranded following a deal to expel Venezuelan migrants crossing into the United States after the new U.S.-Mexico migrant policy, in Huixtla, Mexi

MEXICO CITY (Reuters) – Ana Villalobos remembers what she went through to get from Venezuela to the United States: going hungry, sleeping in the open and crossing rivers and forests with her young son.

She cries upon reflecting on the journey, knowing it bore no fruit. Now, Villalobos is asking for a humanitarian flight to return to her homeland.

Tens of thousands of Venezuelan migrants are now stranded in Mexico or its southern neighbors after a new plan was announced by the United States that, in practice, has closed the door to Venezuelans fleeing on foot.

Dozens of Venezuelans like Villalobos and her eight-year-old son arrived on Tuesday night at a migrant house in Mexico City funded by the Catholic Church while awaiting a seat on a humanitarian flight.

“I want to return to my country because they shut the door on us, in our faces,” the 27-year-old said.

Villalobos, a single mother, left the western Venezuelan state of Zulia a few months ago with her only son.

After working for a few months in Colombia, she managed to save enough money to start the long journey to the United States, even crossing the dangerous Darien Gap, an almost-impassable mountainous rainforest between Panama and Colombia.

In recent years, 7.1 million Venezuelans have left their country, according to United Nations figures, escaping the protracted economic and social collapse of the once-prosperous oil nation.

Human rights advocates have criticized the fact that Mexico continues to sign agreements with the United States when it does not have space to receive more migrants or displaced nationals who also hope to migrate to the United States.

“Everything seems easy to them, simply saying ‘leave them here,’ but where? In the streets?” said Luis Carbajal, director of the Human Mobility Pastoral movement in the Archdiocese of Mexico.

A dozen migrants interviewed by Reuters at a shelter in Mexico City said that their nation’s embassy had told them that it would seek support from the Mexican government to launch humanitarian flights to Caracas.

Since 2018, the government of Venezuela’s Nicolas Maduro has implemented a voluntary repatriation plan called “Return to the Homeland” to facilitate the return of migrants who lack the means to do so themselves.

Through June of this year, some 30,000 Venezuelans had returned home from 19 Latin American countries, according to government figures.

The Mexican foreign ministry told Reuters a flight paid for by the Mexican government carrying Venezuelan migrants was scheduled to leave on Wednesday.

The announcement was made while dozens of Venezuelans protested outside Mexico’s foreign ministry in Mexico City, demanding help.

“It’s been terrible because it’s always ‘no’ in Mexico. I can’t work, the doors are closed to us, we can’t leave, we can’t enter, they don’t let us cross into the United States,” said Kerlyn Mora, a Venezuelan migrant at the protest.