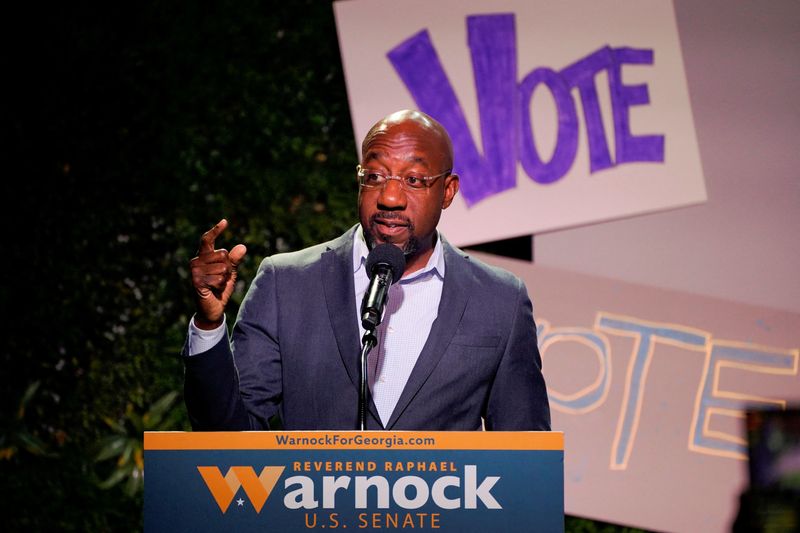 ATLANTA (Reuters) -Democratic Senator Raphael Warnock and Republican football legend Herschel Walker faced off on Tuesday in a final election that will determine whether Democrats can expand their razor-thin majority in the U.S. Senate and solidify Georgia as a battleground state in the next presidential election.

The race will also be a last test of Donald Trump’s clout with voters as he seeks the Republican nomination to challenge President Joe Biden in 2024. The former president had a mixed record in his most competitive endorsements for Congress in the November midterm elections, including Walker.

Walker’s campaign has been plagued by repeated policy gaffes and a variety of allegations, including claims by former girlfriends that he encouraged them to get abortions, although he has campaigned for the procedure to be outlawed. He has denied the accusations.

Retired firefighter Keith Fields, 58, showed up at the polls at 6 a.m. – an hour before they opened – to cast his ballot for Walker in Smyrna. He said he backed Walker because of his stance on immigration, taxes and abortion without exceptions.

“It’s not so much Herschel as the man, but I do like the man, but I’m also voting for the policies that he is going to vote for,” Fields said.

The runoff set early voting records in Georgia in a race that has become the most expensive of the 2022 U.S. midterm election season, with more than $400 million spent so far. The contest went to a runoff after neither candidate secured 50% of the vote in the Nov. 8 first round.

A victory by Warnock would give Democrats a 51-seat majority in the 100-seat Senate, which would make it slightly easier to advance Biden’s nominees for judicial and administrative posts.

While most legislation would still require Republican support, Biden’s Democratic Party will be able to more easily pass bills that are high priorities.

The individual power of Democratic senators Joe Manchin and Kyrsten Sinema to block Democratic-led legislation, as they have done in the past, would be diluted if Warnock voted with the rest of his caucus. If Manchin and Sinema, who don’t always agree on policy, vote together they could still stall Democratic initiatives.

A Walker win would mean that the Senate is back to the 50-50 split of the past two years.

On a wider scale, a Warnock victory could solidify Georgia as more of a battleground for Democrats in presidential elections. It also would be another midterm defeat at the polls for a loyal protege of Trump, who spurred Walker to run.

Turnout was steady, with wait times averaging one minute across the state, said Gabe Sterling, a state election official. “We will exceed 1 million today on top of the 1.9 million already cast,” he said on Twitter.

Analysts say the early votes likely tilted Democratic, which will only a strong Election Day turnout by Walker’s Republican supporters would offset.

“We should not rest on our laurels. The job is not done. The truth is my opponent could still win this election,” Warnock told a crowd in Norcross, Georgia, on Tuesday.

Warnock is the pastor of the historic Atlanta church where slain U.S. civil rights leader Reverend Martin Luther King Jr. once preached. Both Warnock and Walker are Black.

Along with the abortion claims, former girlfriends have also accused Walker of domestic abuse. He has also faced accusations that he maintains his primary residence in Texas, not Georgia.

Walker has denied the charges, but they may have discouraged some Republican voters. Warnock edged him 49.44% to 48.49% in November, even as Republican Governor Brian Kemp and other statewide Republican candidates easily won re-election.

Guri Ben-Hashal, 60, who works in real estate, said his vote for Warnock was actually a vote against Walker.

“I feel that Herschel Walker is unsuitable for the job, to say the least,” Ben-Hashal said in Cobb County.

Meeting supporters at a diner in Marietta on Tuesday, Walker deflected questions about his character, which Warnock has made a centerpiece of his campaign.

“Right now I put my character up against Raphael Warnock any day,” Walker said.

Georgians deserve a senator “who will listen to women,” Warnock told supporters as he spoke about abortion rights.

Republicans won a narrow majority in the U.S. House of Representatives in the Nov. 8 election, but fell short of the “red wave” that some in the party had forecast.

This is the third Senate runoff in two years in the divided state – and the second for Warnock, who first won the seat in a runoff in January 2021.