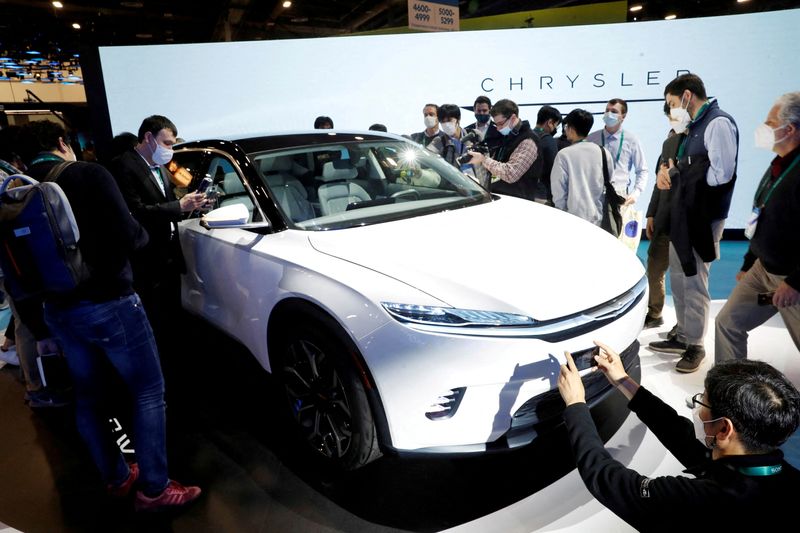 By Nick Carey and Giulio Piovaccari

LONDON/MILAN (Reuters) – The bankruptcy of Stellantis’ Jeep joint venture in China could spell trouble for other global automakers whose output has plunged over the last five years in the world’s largest car market, as domestic players rapidly overtake.

The first joint venture failure by a foreign brand in the electric vehicle (EV) era, the Oct. 31 bankruptcy filing marks a turning point in that Chinese carmakers are beginning to surpass the long-dominant international brands in giving consumers what they want.

“I do not expect Stellantis to be an isolated case,” said Marco Santino, a partner at management consultants Oliver Wyman. “Probably almost all of the western carmakers will have to review the industrial logic of their presence in China.”

Some elements of the Jeep joint venture’s failure are particular to Stellantis – and the former car groups that feature among its 14 brands. But data compiled for Reuters by consultancy LMC Automotive expose a problem shared by a number of other global carmakers: plummeting Chinese plant usage.

The fewer cars a plant produces, the more likely it is to be loss-making.

The Jeep failure in China happened less than two years after Stellantis was formed by the merger of PSA and Fiat Chrysler.

In the run-up to the deal, Chief Executive Carlos Tavares had said no carmaker could afford not to be in China and the expectation was the two companies would together be better equipped to make headway there.

But Stellantis earlier this year said it would end its venture with local partner Guangzhou Automobile Group (GAC), just months after saying it would raise its stake to 75% from 50%.

The U-turn leaves the world’s No. 3 carmaker by sales with only limited Peugeot (OTC:) and Citroen production in China, which it has said could also be shut down, although it has yet to decide on that.

Stellantis’ Tavares meanwhile has touted an “asset light” strategy whereby the carmaker will import higher-margin cars like Maseratis and Jeeps into China.

The carmaker’s outspoken Portuguese CEO has complained “political influence is growing by the day” in China and has accused Stellantis’ joint-venture partner GAC of not acting in good faith.

GAC has said it was “deeply shocked” by critical comments from Stellantis.

According to LMC data, Stellantis’ estimated full-year capacity utilisation at its Chinese assembly plants will fall to 13% in 2022 from 43% in 2017.

Other mainstream brands, including Volkswagen (ETR:), General Motors (NYSE:), Ford, Mitsubishi and Hyundai, have also seen plant usage fall by anything from over 30 to more than 50 percentage points in the last five years.

At the same time, global carmakers’ sales in China have dropped as local rivals have taken off because the Chinese automakers embraced EVs and consumer-centric in-car software far more quickly.

“The last five years, (China’s) market has decidedly changed from foreign companies having a right to win because of their foreign-ness to where there is a far more level playing field,” said Bill Russo, head of consultancy Automobility Ltd in Shanghai and a former Chrysler executive.

“Chinese companies actually have an early mover advantage because they embraced electrification faster than the foreign companies were willing to,” he added.

While fully-electric cars make up an average of 5% of models foreign carmakers sell in China, they account for 30% of Chinese carmakers’ models, according to LMC data.

COMPETITION HOTS UP IN EUROPE

Some Chinese rivals like BYD that have more EV models in their line-ups, are also aiming to grow in Europe.

This means that as the global giants Volkswagen, Ford and GM work to bring more EV models to market, they face stiff competition from younger Chinese rivals that have adapted quickly to shifting consumer tastes.

They must also overcome an image that is rooted in combustion-engine era technology.

GM is counting on a broad range of EVs to rebuild profits from its Chinese operations – which fell by 44% to $477 million in the first nine months of this year – to $2 billion by 2030.

“I wouldn’t jump to conclusions about China based on 2022,” Chief Financial Officer Paul Jacobson told reporters earlier this month. “We still feel good about where we are going there.”

Volkswagen said in a statement that China has been in a “special situation” due to the pandemic, the global semiconductor shortage and the “accelerated transformation towards electric mobility” that has affected production capacities across the industry.

“Volkswagen continuously assesses these special factors and adjusts its production planning at an early stage if necessary,” the carmaker said.

Ford said it was working to overcome the production challenges posed by COVID-19 and the semiconductor shortage.

The Jeep brand was originally brought to China by American Motors Corp before being taken over by Chrysler in 1987. It sold the same lone Jeep Cherokee model for 20 years.

Automobility’s Russo said that over the years, Chrysler, Fiat and Peugeot – which are all part of Stellantis, and all had their own Chinese joint ventures – had struggled before they became part of the same car group.

“These are companies that really never quite figured out the formula that leads to success in China,” Russo said.

Michael Dunne, CEO of California-based consultancy ZoZo Go and a former GM executive, said that as domestic carmakers rise in China, international brands will find it harder to obtain local licences and will not have the same access to loans from state-owned banks.

“Stellantis is a canary in the coal mine,” Dunne said. “Forever, the foreign brands were the favoured sons in China.”

As the formula for success in China has changed, consumers want EVs akin to smartphones on wheels where the emphasis is on connectivity and apps rather than performance – to the extent that EV makers like Nio (NYSE:) have a built-in selfie camera in some models to appeal to younger buyers.

So far Mercedes and BMW have held their appeal, partly because they retain a good image as aspirational brands in China, but also because Chinese carmakers have yet to turn their attention to producing luxury EVs.

LMC’s Cox said other international brands could possibly claw their way back to higher market share in China, but it would take time and a lot of investment in new products.

“Once a brand’s damaged or at least looks stuffy or old-fashioned or not appealing, then it’s very difficult to hit some home runs,” Cox said. “Some of the companies with a clearly mainstream positioning may find it very difficult to come back.”